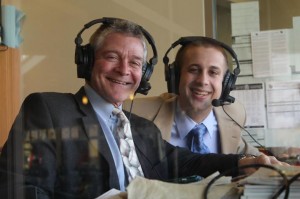 Mike Couzens, right shown broadcasting a Fort Wayne Tincapsbaseball game. For an article on his stint this weekend telecasting the national high school final four on ESPN follow the link below.

WPCNR VIEW FROM THE UPPER DECK. From the Fort Wayne Tincaps. April 6. 2014:

Mike Couzens, 2007 graduate of White Plains High School and 2011 Syracuse University graduate as you know from a previous feature on Mike on WPCNR is the Promotion Director and Voice of the Fort Wayne Tincaps,  a minor league affiliate of the San Diego Padres, during the baseball season. He also is a go-to broadcaster for all kinds of games in a galaxy of sports all over the country  for ESPN.

This weekend, the Tincaps report, Mike has been tapped to telecast on ESPN the high school national basketball tournament, and is featured in an article on the ESPN website, which you can read  right here: http://frontrow.espn.go.com/2014/04/mike-couzens-brooke-weisbrod/

Mike got to telecast from Madison Square Garden. Congrats, Mike, we’ll be looking for you in a major league play-by-play booth someday soon.