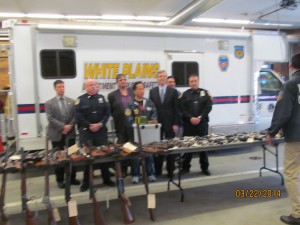 Commissioner of Public Safety David Chong (center) with Mayor Thomas Roach to his left before the display of 54 handguns and 40 rifles, shotguns and military rifles turned in by the public Saturday morning at the first ever White Plains Gun Buy Back. The arsenal of 54 “highly concealable” hand guns was impressive below. 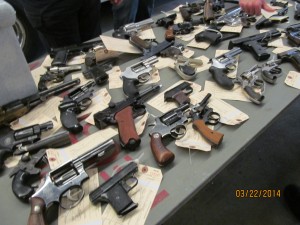 Ninety four guns were turned in by the public at large in four hours Saturday morning  ( no questions asked) at the first Gun Buy Back held in White Plains.  The citizens were paid a total $5,075 for the guns from state (crime) forfeiture funds.

It was the first buy back event ever in the city. It was organized by the City of White Plains in cooperation with the New York State Attorney General’s Office. 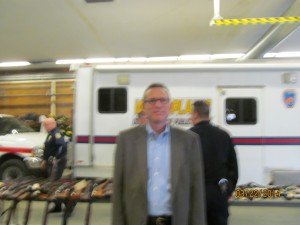 Assistant Attorney General Gary Brown, (above) in charge of the Attorney General’s Westchester Office said 54 handguns all in working, firing condition, were purchased back and 40 rifles, including shotguns and military weapons were turned in.

Mr. Brown said the event was a success. He said the next Gun Buy Back would be held in Poughkeepsie next Saturday March 29 at the Poughkeepsie public safety building at 505 Main Street. Brown told WPCNR the majority of persons turning in guns were over 40 years old. Many, he said, had had the guns in their possession for years and were pleased to get them out of their possession.

Mayor Thomas Roach of White Plains in a news conference said his office worked with the Attorney General Office to set up this morning’s gun buy back, but had no idea what to expect. “When I  arrived about 9:30, there were 40 people sitting down waiting to turn in guns.”

By 10: 30, 80 guns had been turned in for cash payments in the form of debit cards. The guns were turned in and no names were recorded.

White Plains Commissioner of Public Safety David Chong called the White Plains Gun Buy Back a “success,” and hoped, working with agents and the attorney generals office, that another White Plains Buy Back could be arranged. 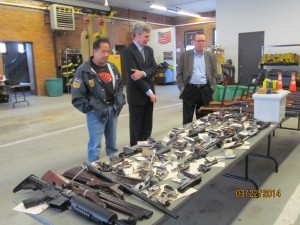 Commissioner Chong  (left) pointed out the vast array of pistols to Mayor Roach(center),  what he called “easily concealable handguns” as now being weapons that could not be stolen out of persons homes and possibly used in a crime.  Assistant Attorney General Gary Brown stands at the far right. 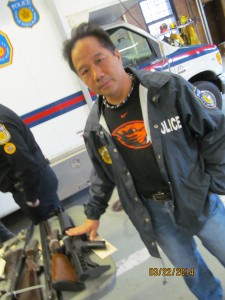 Chong singled out a very realistic looking assault weapon replica that fired multiple rounds of BBs, which he said “sadly is available to the public.” He said such a gun ( a working replica of an assualt rifle) could lead to an unfortunate incident and regretted such a working replica was available for sale to the general public, and did not have to be licensed.