When I arrived for the opener of  the Superintendent Search Forum Doubleheader  at White Plains High School Monday afternoon at 5:30 P.M.  I was shocked to see just two parents there, despite quite adequate publicity through the PTAS. 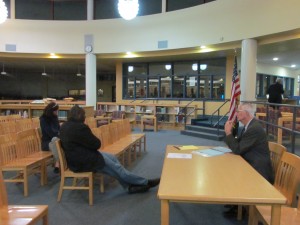 Dr. Charles Fowler of School Leadership Holding a Forum for just two White Plains parents who discussed their concerns for an hour. 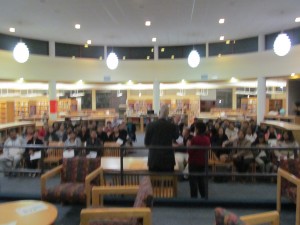 It was a different story at the 7 P.M Forum. which advertised itself as having a Spanish Translator available. Sixty persons including 12 children attended

In the first hour most comments were made in Spanish and had to be translated for Dr. Fowler by an interpreter provided by Centro Hispano. There is another Superintendent Search Forum to gather comment this evening at Education House, beginning at 7 P.M.

I do not know  what the online responses are saying, but if you want to be heard, you can fill out the questionnair by going to www.surveymonkey.com/s/wpps

The comments from White Plains largest turn out of Latinos for a school meeting this reporter has seen in 13 years called for attention to basics for their population that they thought the district and any new Superintendent they should be committed to retain  or more significantly, enhance.

Mothers and fathers hailing from Venezuela, Peru, Cuba, Mexico, just a few of the countries mentioned with children in the district  pleaded– 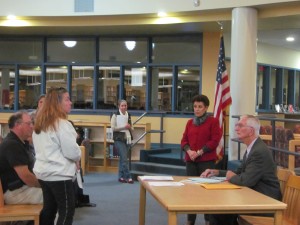 Dr. Fowler, right listens to concerns of a mom, while an interpreter prepares to translate.

Asked what was good about the White Plains School district, parents commented the district was very welcoming  Another complimented the dual language program in all the elementary schools and said it should be expanded with more classes through high school.

A White Plains retired teacher commented  he felt the district should develop more “innovative programs” to absorb Spanish-speaking students of all ages coming into the district for the first time.  Another White Plains teacher currently on staff after listening to the comments made during the first 45 minutes said she was very impressed that many of the parents present had concerns about the same issues other parents (in the district) had, and allowed that other parents had concerns about other issues, and that the future Superintendent would have to be a “great communicator.”

WPCNR could only stay for an hour, but it was a strong, concerned group. Their complete comments will be made available in a meeting December 9 . No one on the Board of Education attended either forum because the Board does not want to inhibit public comment. But it is unfortunate no one from the Board could have witnessed this second forum.

Dr. Charles Fowler, head of School Leadership, LLC,  the new firm chosen by the Board of Education lead  the kickoff of the two-day series of 3 public forums to take the measure of what parents and interested persons want to see in a new Superintendent of Schools for White Plains.

Dr. Fowler told WPCNR his firm had received about 50 filled-out questionnaires on the School Leadership website, at www.surveymonkey.com/s/wpps.  The questionnaire is available on that site for parties to fill out and weigh in on.

We do not know what the online survey responses say yet but those comments will be boiled down and provided to the public December 9 at 7:30 at White Plains High School, Building B-1