↓
Home Menu ↓
Home→44 Years Ago: Men Walked on the Moon. A Tribute to the High and the Mighty

This column originally appeared on WPCNR on February 1, 2003, and celebrates the Dreamers, the Achievers, the High and the Mighty: 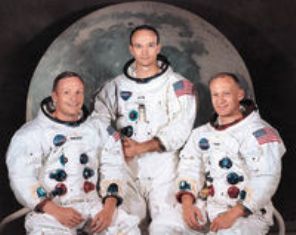 The two papers I receive at WPCNR White Plains News Headquarters, White Plains, New York, USA did not tell you this was the 44th  anniversary of the day when Neil Armstrong walked on the moon.

The exact hour  was  20:11 GMT (Greenwich Mean Time). That was the culmination of the last great American achievement  — the personal computer and the internet were to come as the next great American achievement conquering space — when Apollo 11 with Armstrong in command, with astronauts Michael Collins and Edwin E. Aldrin, Jr. blasted off to the stars  for real becoming the Flash Gordons, Buck Rogerses, Tom Corbetts and Captain Videos for all-time.

Their mission was a success.

But there have been the tragedies associated with striving for the stars and being the best, achieving the best, working for the good. Those are the persons who keep the dreams alive by their deaths and personal sacrifice. I wrote the following after the explosion of the Columbia Space Shuttle upon reentry after 19 days in space in January 2003.

Saturday’s fatal Columbia Space Shuttle accident killing all 7 astronauts aboard when the historic spacecraft broke up over East Texas at daybreak Saturday morning begins a period of national mourning.
The expected media speculations have started, guessing at the cause of the reentry that went bizarrely, awfully wrong.
The truth is the civilized world takes absolute scientific miracles for granted. We do not appreciate the courage and skills of the men and women creating the future.
Those of us with cell phones, internet connections, high-speed trains, satellite communications and entertainment (all products made possible by the space program), do not realize the magnitude of daring achievements that you and I have come to accept to be executed like clockwork.
I first learned of Columbia’s fate late Saturday afternoon when my wife mentioned that instead of sports programming being videotaped on our television, there was coverage of a live NASA event on ABC.
(Incredibly, the radio station I had been listening to on the way from a sports clinic had not reported any hint of the accident. That station was Z-100, the most listened-to station in the New York metropolitan area. America Online also on their first up page did not mention the missing craft as of midday. That kind of communications misjudgment is sad.)
As I watched the close of Mr. Jennings’ coverage at about 3 PM, he signed off with no recap, no names of astronauts, and some parting words about what he thought was the cause of the disaster.
I’ll say what he should have said.
Columbia’s seven astronauts who died — we know their names: they were

Columbus, Magellan, Cook, Lewis, Clark, the Wrights, Lindbergh, De Laroche, Earhart, Markham, Gruber, Chaffee, Grissom, White, Gargarin, Komarov, the Challenger Crew, the crew of Soyuz 11. They are a handful of the hundreds of brave men and women who went into the unknown. 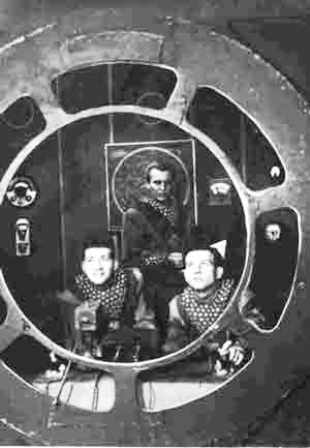 Appollo 11’s Crew turned the dreams of the 1950s visualized in television shows like Tom Corbett, Space Cadet (above, Astro, Roger and Tom) and Captain Video, “The Master of Science” below  into reality.

America’s Spacemem and the explorers before them are the people who trust in their ability and their vessel to expand the world’s horizons, to know the unknown, whose legacies build a better world. Whose deeds inspire and achievements are the catalyst for achievement to come.
From Cook’s fragile vessel which sailed the Pacific, to the marvel that was the Columbia, the captains courageous who sailed the Roaring 40s, blazed the Oregon Trail, discovered how to fly, and flew the oceans, journeyed to the stars, knew the risks they were taking.
The media  trivializes their courage, their skills, and the difficulty of what they did and wanted to do, to concentrate on the causes of their failure, as if knowing the cause will make their loss acceptable.

The Magnificent Seven
I do not know Columbia’s Magnificent Seven. I just see their smiling faces in their photograph, and I regret the loss of every one. They had achievement on their faces, pride in their demeanor. Their eyes shown with the glow of being alive and striving to do the great things they set out to do.
Civilization has been created because of people like the crew of the Columbia’s Magnificent Seven, not the incompetence we see demonstrated daily today where technology is concerned.
The Columbia itself had flown 26 missions since launching in 1981. It was guided and outfitted with the best 2003 communications and equipment had to offer.

Not like Captain James Cook’s bark, Endeavour, a 100-foot ship powered by sail that conquered the “space” of his time, the Pacific Ocean. It was the Columbia’s Magnificent Seven’s Endeavour. They were tracked, they were backed up, but they perhaps more than anyone here on the ground knew the high dangers of the shuttle mission.
Liftoff, as their predecessors, The Challenger crew fell victim to, is fraught with risk. Reentry, which needs to be negotiated at precisely the right angle of attack, is equally risky. Soyuz 11’s spacecrew of Dobrovolskiy, Volkov, and Patsayev died in 1971 on reentry, when the Russian cosmonauts took too long to descend.
No guarantees in real life. Machines sometimes run out of miracles.
The magnificence of the explorers’ sacrifice and dedication, is that they accept the risk of “the endeavor.”
They accept the challenge, bear it alone, seizing challenge with an indomitable spirit and confidence, facing death when it comes with the satisfaction that they made the effort, and I suspect analyzing, coping, trying to fix it until the end, the very end. Then never give up.
Columbia’s Magnificent Seven, after 16 days in space, are gone now. My sorrow is with their families who will miss these Magnificent Seven, and who know in their hearts that they died trying to reach the pinnacle of their aspirations.
They are only human.
They tried their best, achieved their best, and experienced what they longed to experience. They dared to live the great adventure.
Not all of us have the courage to follow our longed-for adventures and make them real. You can watch movies that attempt to give that experience by transference. That’s why, I believe, you and I take it so personally when we lose heroic personalities of our time. We wonder what they are like. We glorify them, rightly so.
Follow Me! They Say.
I wonder how those Magnificent Seven felt, how satisfying it must have been, to be at your best, doing what you love, coping with the risks.I envy them that.
The Columbia Crew is the Miracle.
In reality it is not machines that conquer, it is the intrepid personalities, each unique, each contributing, who perform the miracles with God’s help. That they fall short is an example to us, not to take ourselves, our fates, or our existences for granted.
This is true of the everyday people we take for granted: the firefighter, the policeman, the train engineer, the airline pilot, the construction worker. All are highly trained disciplined workers, executing precise tasks for which the non-expert has no feel or understanding . What makes for the desire to achieve? What is out there or up there that leads them on?

The Feel of the Unknown

I took Anne Morrow Lindbergh’s biographical adventure diary, Listen! The Wind down from the bookshelf.

She was the young bride of the aviator-pioneer, Charles Lindbergh. She navigated for him in his aircraft, and ran his radio communications on his many exploratory flights around the world.

In a passage she describes a night flight over the ocean, in which she was operating the radio for her husband Charles, who was at the controls. Mrs. Lindbergh is describing the feelings she has as she tries to tune in the South American coast at sea in the dark of night in 1933, 80 years ago.

The feeling, the courage of the adventurer, the explorer has not changed. This is great:

“Night was the hardest. It would be all right once it was day. I kept saying…We began to hit clouds. I could tell without looking up, for the plane bumped slightly from time to time, first one wing down and then the other. And the moon blackened out for short periods.

Then for longer periods. I could not see to write my messages. I stiffened, dimly sensing fear – the old fear of bad weather – and looked out. We were flying under clouds. I could still find a kind of horizon, a difference in shading where the water met the clouds. That was all. But it seemed to be getting darker.

Storms? Were those clouds or was it the sky? We had lost the water. We were flying blind. I turned off the light quickly (to give my husband a little more vision), and sat waiting, tense, peering through the night. Now we were out again. There were holes through which one could see the dark sky. It was all right, I felt, as long as there were holes.

More blind flying. This is it, I thought is what people forget. This is what it means to fly across the ocean, blind and at night. But day is coming. It ought to be day before long… Daybreak! What a miracle. I didn’t see any sign of day and yet it must be lighter. The clouds were distinguishing themselves more and more from water and sea.
Daybreak—thank God—as if we had been living in eternal night—as if this were the first sun that ever rose out of the sea.