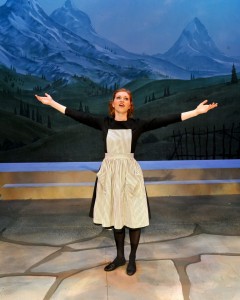 What is the best  super musical of all time? My Fair Lady? Anything Goes? Phantom?  Annie Get Your Gun? Forty Second Street?

My vote is The Sound of Music.

The measure of a musical entertainment is its impact at the time and how it plays a half century after it was first produced. The Cole Porters, the Lerner and Lowes, the Irving Berlins, the Rodgers and Hammersteins’  they hold together  charming audiences decades removed from when they first awed critics and were hot tickets.

You see the magic that sets the supermusicals apart from the rest through August 11 at Westchester Broadway Theatre, (the Super County’s number one entertainment value).  Bring grandma, grandpa, and the grandchildren to see Bob  Funking and Bill Stutler’s (creative teams in their own right)  production of  R & H’s The Sound of Music.  Sound of Music  flaunted its  charm before the distinguished members of the press Thursday evening.

As the nuns of Nunnberg Abbey wonder where Maria is, there is the intrepid Maria, played with poised aplomb by  Aubrey Sinn, singing The Sound of Music  against a majestic mountain,  you come alive! As if an old friend is back again.

How do you catch a cloud and pin it down?

How do you find the word that means Maria?

A flibbertigibbet, a willow the wisp, a clown

After these first two songs, if you’re not already in love with  Ms. Sinn’s Maria, who hits just the right nuances of independence, spirit, courage and spunk, with repressed sex appeal, and sense of wonder too, of course, hitting all the notes just right, emotionally, comically  as well as  personnally connecting, 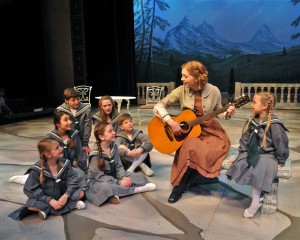 Ms. Sinn (last seen in Legally Blonde at this venue) is totally believable, interacting naturally and selling Maria’s connection with the von Trapp children, played  by the best acting collection of kid thespians I have seen in a long time since the Mousketeers. 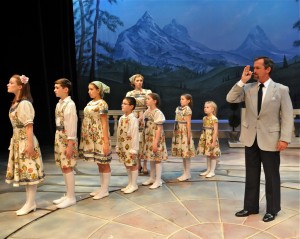 Captain von Trapp (Matthew Shepard) is shocked, shocked to see his children singing under Maria’s tutelage and whistles them back into march step

They did not all play on the night I saw the show, but the ones who did play had such great rapport, choreography and presence particularly on  Do-Re-Mi. Maria transforms the regimented children of Captain Von Trapp, and teaches them to sing. (Von Trapp summons his children  with a naval ship whistle that’s how domineering he is).

When Maria  is first introduced to the dashing Captain Von Trapp and the uplifting attraction between the three: Maria, von Trapp and the children clicks on stage!  The singing children capture you in the nonsensical “So Long Farewell” at the close of the ball in Act One. (Surprised how songs you know keep cropping up?). Come on you slightly older people–you remember how So Long Farewell goes:

I hate to go and leave this pretty sight

The oldest of the children Leisel is brought heart-rendingly to life by Molly Emerson whose love for a young man engulfed in the Nazi occupation of 1938 cannot be. Ms. Emerson’s emotionally true reactions – the dramatic confrontation in Act Two in the Abbey Garden with Rolf (Cameron Bartell) is a dramatic highlight – are played flawlessly.

Molly Emerson as Liesl duetting with Cameron Bartell singing Sixteen Going on Seventeen duet in Act One is pitch perfect between the two. I liked these two actors in this cameo romance.

I am assuming everyone knows the story of The Sound of Music. I saw this with my journalism colleague, Brenda Starr who in her career of reporting for The Flash, had never seen either the musical or the movie of this musical. Ms. Starr is very demanding in her entertainment. Well, she felt the production was  “Well  done. Maria was great sang beautifully and sweet and innocent and the kids were all fun.” This is high praise from the no-nonsense redhead.

The musical is based on the story of Maria Von Trapp who published her autobiographical book, The Story of the Von Trapp Family Singers  in 1949. It is the true account of how she and von Trapp fled German-occupied Austria in 1938, escaping with nothing, eventually settling in Vermont, making a new life for themselves, and toured the world as The von Trapp Family Singers.

Mary Martin, the actress bought the rights for a stage version, commissioned a script and Rodgers and Hammerstein wrote new songs.  It became a  Broadway hit that plays today with all the heart, inspiration and magic it had 54 years ago.

So you’re getting the idea here that WBT has in its reverent respect for the great musicals of yesterday and beyond yesterday has brought this classic back? I hope so. 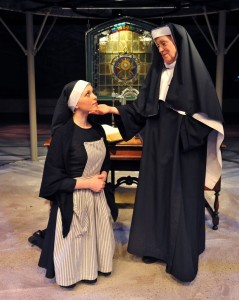 Karen Murphy, playing The Abbess will send chills up your spine and replace your lost courage with her glorious over-the-top house-pleasing Climb Every Mountain.  Ms. Murphy exhorts Maria – who of course has fallen in love with Captain Von Trapp – and has left to return to the abbey in shame — to go back to the family because her love for von Trapp is a higher calling – as love always is. Murphy steals the show with her two belt-it-out-of-the-park Climb Every Mountain performances. 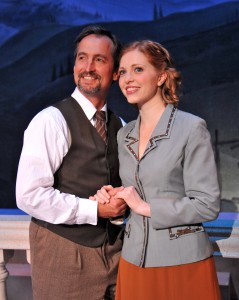 Matthew Shepard is a game Captain von Trapp to the iconnette   Maria, Aubrey Sinn. I would have liked to have seen a little more chemistry, (but you know these military types!) But perhaps that is what is most charming about Shepard and Sinn in these two roles. They are an incongruous striking couple without the faux passion that Hollywood so often sells us. You root for them.

The clinches between Von Trapp and Maria are delicately and expressively played.  Shepard appears genuinely enchanted. Maria not knowing what is happening to her.  And they will get better. It’s true romance. Everybody in the audience feels it and wanted it.

Maria’s return to the von Trapp family in Act II is well –played by them both. The marriage of the two excellently staged.

When the nasty Nazi high command shows up demanding von Trapp take a commission  in the Nazi navy, Maria and her new husband know they must escape. (A note: the menace of the Nazis is superbly rendered by the brown-shirts in this.)

Jamison Stern plays a deft comic foil in Max Detweiler who encourages the von Trapps to appear in the national talent show that plays a key role in their attempt to escape.

Michelle Dawson does a glamorus 30s heiress with her cap set for the Captain, delivering laughs as she observes the threat Maria is to her designs.

The talent show  Max  arranges sets the stage for the von Trapp escape.  The lovely Edelweiss sung by Maria,the children and the Captain at the conclusion of the talent festival means there is no turning back.

Does true love triumph? What do you think?

In my mentioning all these songs, don’t you want to hear them again? You bet.

This is a show where the book is so seamless with the music, tunes so good they move the plot, and  that the frequent reprises in the show tell the timelessness of their message.

A tip of my panama hat to Jonathan Stahl, the director and choreographed whose controlled staging and plot-concious choreography did not distract from the emotional drive and momentum of this musical. And this one really moved, ladies and gentleman. An hour and a half first act that seemed short. The relaxing 30-minute intermission.  A 45-minute second act  filled with suspense and left you walking out uplifted, entertained, and enthralled. The orchestra under Leo P. Causone laid a musical bed that made the singers’ lyrics glitter. No overriding!

As Piia Haas, the ballyhooette who writes WBT program notes observes, “It has been said of the pair (Rodgers and Hammerstein) that they changed the destiny of American musical theatre. The Sound of Music ended up being the most financially successful film adaptation of a Broadway musical ever made.”

Ms. Haas who can be considered the curator of musical history at the WBT, notes in a poignant anecdoate, Edelweiss was the last song Oscar Hammerstein II wrote.

Sound of Music ran for five years on Broadway for 1,443 performances.

In my book, I had no expectations going to see this. My natural cynicism was ready to dismiss it. But, it’s right up there slightly better than My Fair Lady, I’d have to say the musical’s songs and book speak to the doubts we all have in life. The many reasons we find not to chase our dreams and addresses the reasons why we should have the courage to never let them go.. 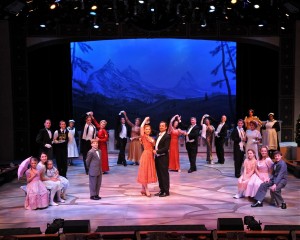 The ball, where von Trapp is distracted by Maria.

This is Number one in my book. You will love it. And not one nasty word in it. Perfect for children of all ages.

The Sound of Music reprise at Westchester Broadway Theatre plays through August 11. Tickets which include dinner may be purchased at  914-592-2268 or on the theatre website, www.BroadwayTheatre.com