↓
Home Menu ↓
Home→The Mayor for All Seasons Has Passed Away 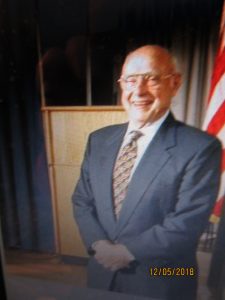 Mayor Alfred Del Vecchio, who served as Mayor of White Plains for 18 years from 1976 through 1993, died overnight Tuesday. He was 95 years of age.

The McMahon, Lyon and Hartnett funeral home has announced there will be a Visitation Sunday, December 9 from 3 PM to 8 PM at the McMahon funeral home,491 Mamaroneck Avenue, White Plains.

Mass will be held for the Mayor Monday, December 10 at 10 A.M. at Our Lady of Sorrows, 920 Mamaroneck Avenue, White Plains.

Mayor Del Vecchio brought White Plains into prominence during his years of service. He shaped the rebuilding of the White Plains urban renewal project which introduced The Galleria in 1980, and numerous office buildings that made White Plains a corporate center. He preserved the outer neighborhoods and created the “city in the middle of the neighborhood.” He was a strong leader negotiating development with an eye to improvements for the city in addition to success for developers.

He was a leader in every sense of the word. An engineer by profession, and a professor, he lead through expertise and intense involvement in negotiations, problem-solving, and his gregarious, but no nonsense personna.

He stood up for the city against outside political influences that only had their best interests, not the city in mind. He created the esprit de corp that made the Department of Public Works, Planning and management of the city, professional, dedicated and performance-oriented.

His financial management  made White Plains taxes the lowest and most attractive to homeowners for decades–a legacy White Plains still enjoys.

He was married to his wife, Claire for 73 years.

“It is with sadness that I inform you of the passing of former Mayor of White Plains, Alfred Del Vecchio. Mayor Del Vecchio was our city’s longest serving mayor. He served 4 terms, from 1976 to 1993. During his tenure downtown White Plains saw significant change.

Mayor Del Vecchio guided the city through the process of urban renewal, which changed the face of the central business district.

As Mayor, he oversaw the modernization of land use regulation in the city.

Mayor Del Vecchio was an early advocate for the use of energy efficient technology. Under Mayor Del Vecchio the city first tested and utilized environmentally friendly alternative fuel vehicles.

He secured permanent, direct Community Development Block Grant Program funding for the city through special federal legislation. This funding continues to be used today for neighborhood and streetscape improvements.

Mayor Del Vecchio managed the complete reconstruction and expansion of the city’s Ebersole ice-skating rink, without the loss of any skating-season time.

He acquired the closed state armory on South Broadway and arranged for its conversion to senior citizen housing and a public senior citizens’ community center still in use today.

During Mayor Del Vecchio’s tenure, a new Public Safety/City Court building was constructed to house the police department and City Courts. This was also done on time and under budget.

He secured funding for the construction of the Bronx River Parkway exit ramp to Main Street, which permitted closing of the Woodlands Place exit, thus reducing traffic in the Fisher Hill residential neighborhood.

Mayor Del Vecchio was a Professor of Mechanical Engineering at Manhattan College. He was elected to the Common Council in 1972 and served for one term before becoming Mayor.

Mayor Del Vecchio had the honor of hosting President Gerald Ford in 1976, when the President visited White Plains for our country’s Bicentennial celebration.

We send our condolences to the Del Vecchio family and our gratitude for the years of dedicated service he gave to our city.”