↓
Home Menu ↓
Home→Dashing Masked Young Phantom To Die for You 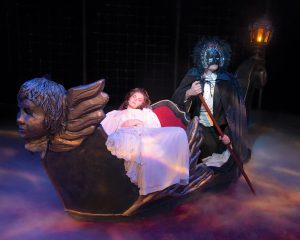 Come my elegant friends to enchantment, mystery, glorious music  awaiting you at the Paris Opera House of La Belle Epoque at the turn of the 19th Century!

The mystique of its Corinthian gilded columns and elegant boxes, the ghostly secrets of its underground depths, magnificent, brooding atmosphere  rendered lovingly by Westchester Broadway Theatre. 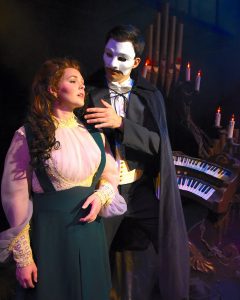 Meet the Phantom of your dreams the swashbuckling, trademark cape-swishing intense and dynamic phantom Matthew Billman, (of Brooklyn,NY,USA),  he of the  irresistible baritone that sets women aflutter, that fills the WBT space with his longing, charisma, commitment, and magnetism.

His Phantom is smitten with his femme fatale, the divine ingénue, Christine Daee’ pitch-perfectly played in femininity, looks and soprano by Kayleen Seidl, as the chestnut tressed diva-to-be determined to make it in opera.

Ms. Seidl’s soprano exquisite’ dazzles, glistens ripples tender feelings and swells in splender into breathtaking waves towering, cascading over you powefully lingering in frothy foam of joy, tears, regret — creating in duets with Mr. Billman the jagged edged diamonds of outspoken devotion, anxiety, frustration, raw heartbreak of a love that can never be.

Ms. Seidl will make you weep.

I have to say the electricity the leads deliver makes you root for them. 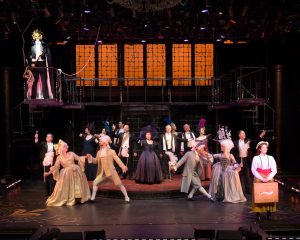 This production holds the  Westchester Broadway Theatre record for WBT’s longest run ever staged of all their 207 productions, nine months from 1992 to 1993. It lured people in because it is so good. Not a revival it is a survivor, hailed as a superior Phantom by critics including yours truly, Mr. and Mrs. White Plains.

That original WBT production  launched a national tour of the Arthur Kopit (Book) and Maury Yeston(music & lyrics) show. Kopit and Yeston were working on this show in  the early 1980s, trying to get financing for it when Andrew Lloyd Webber’s Phantom of the Opera secured financing first, and Kopit and Yeston abandoned the project in 1983.

Ironically, like the real Phantom, the K & Y musical was buried in the Yeston and Kopit vaults. It was produced out of town in Houston and Seattle and the public loved it.

Mr. Billman’s Phantom is more romantic and seductive, less dark in feel, and contains sensitive family matters, violence (gunshots, explosions) and action. The Phantom is not over-the-top deranged as the Phantoms of the movies.

If you want a Phantom to fall for, Mr. Billman is it. The Phantom is a composite of vampire, mystery man and Superman. Every woman wants a masked mystery man, (preferably in a cape)

If you want a Christine to take under your wing because you think she’s fabulous, well, sir, Ms. Seidl’s Christine is she.

You are familiar with the Webber songs of the Broadway hit, but this Phantom delivers  fascinating new ballads and arias to charm you. The musical placed in an opera house plays like an operetta.

If you like opera and thrive on its high hysteria and over the top drama and splendid tragic endings that uplift and hold out hope, this is the stuff your dreams are made of. If you like romantic musicals with an ending building to the future, well you’re going to cry but you will want to know what the real Matthew Billman looks like under the mask. And the only way you can see that is in the Playbill.

It’s the gilded age in Paris.

Here’s the situation. Phantom begins with a “Thump Thump Thump”  of the live orchestra trending with a doom beat the ill-fated romance of an overture as Parisians stream about the streets in front of the Paris Opera.

Ms. Seidl’s  Christine is singing in the streets of Paris like so many young actors with her marvelous  Melodies de Paris and is noticed by Count Philippe, a bon vivant (Larry Luck) a patron of the opera who gives her his card to introduce her to the new opera managers.

Cut to the opera house: the Phantom commands with his tall, broad-shouldered figure and his cape, which he uses like a sidekick and sings the ominous Paris Is a Tomb giving you an idea of the loneliness of this tortured young man who has lived his live in the catacombs of the Opera House for most of his 20-odd years. He is virile, isolated and all he knows is the opera.

Meanwhile, in the manager’s office, the wife of the new opera house manager,  Carlotta (Sandy Rosenberg) has fired the long-time manager of the House, Gerard Carriere played stylishly and sensitively by James Van Treuren.

Carriere has for years helped Eric (The Phantom) to live in the depths of the Opera Building and the answer why he has helped  him is not explained. Eric wears a mask.  Ms. Rosenberg does a malicious delicious This Place is Mine a prelude to the conflict to come.

Carlotta who wants to sing lead in her own opera house listens to Christine sing who has used her card of introduction and confines her to wardrobe.

Eric, the Phantom watching from  a place of concealment is smitten listening to her sing to herself. He is smitten. He offers Christine singing lessons.

Christine is equally intrigued with the tall,towering mystery man and especially his moody sensitive brown eyes.  In the first of their duets, Home solidifies the audience’s equally smitten relationship with the two leads.

When the two sing the audience bravos every time they finish with a flourish.

The Phantom brings down the house with his ode to Christine’s talent, You are Music. This is a blockbuster where Mr. Billman just makes the audience soar with the spirit of his caring for Christine.

As the Phantom (who has learned to sing from his mother) teaches Christine her Fa-la-la’s  stage left, their work is seamlessly staged by Director Tom Plum’s two scene-split with intrigue at the Opera House. 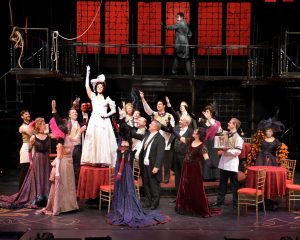 Nailing It! Eric prepares Christine for a singing competition at the Bistro which she (Ms. Seidel in white) of course, nails with her Christine Oligato and As You Would Love Paree.

Carlotta jealous of Christine’s talent has plans for her. She gives her a lead role, and after a suspenseful interlude in Christine’s dressing room, Christine makes a serious mistake.

The first act  flies by with the mounting drama, glorious songs and downright lurkiness of it, ending in an opera opening disaster. The audience left with a cliff-hanger for Act Two.

It’s the Phantom to her rescue. Has she lost her voice?  Will she live? What have they done to her?

Second Act: Plot deepens. The Phantom has carried Christine to safety with a marvelous boat  drifting romantically across the lagoon beneath the opera house. The boat with the Phantom poling to a secret refuge, the elegant Phantom’s Bedroom. And who is the mysterious woman on the headboard of the bed?

Mr. Billman and Ms. Seidl sing to each other with a duet to hear, Without Your Music and Where in the World. The WBT orchestra never intrudes, and lays a bed of melody letting the Phantom and Christine just enchant the audience with splendors of lyrics you will hear for the first time.

As the bedroom scene continues we go back into Eric’s past.

Carriere comes down into the bedroom, warning Christine she must leave.  Carriere tells of his past with the woman whose portrait appears on the bed. This backstory is elegantly rendered in a ballet of Carriere’s past with a young dancer,and it reveals the secret origin of The Phantom

Meanwhile the chase is on for Christine.

The drama heightens when Christine in her caring for Eric convinces him to reveal his mask.

What happens next will shatter you, uplift you and bring you to emotional empathy that you will take with you and always remember more than you know.

You will cry at  the duet of the two lovers, where Billman and Siedl play off each other beautifully and bond  together as they part. A triumphant ending worthy of Aida.

James Van Treuren as Carriere, does a meaningful dramatic turn when he reveals his emotions of a lifetime with Eric in stirring duet with the Phantom which unravels the mystery and explores the regret and satisfaction of caring and standing for someone else when no one else would.

I love this staging. The opera house lives!

Set Coordinator Steve Loftus, Set Coordinator/Scenic Artist Carl Tallent and Lighter Man, Andrew Gmoser capture the vaulting, haunting opera stage atmosphere. They especially have made a star in a leading role of the WBT stage transforming it into a bedroom, a boat that is believable visually and more fog than you’ll ever see in London.

Phantom is playing through November 25, and returns from the catacombs from December 27 through January 27, 2019.

Get on the phone now (914) 592-2222 for tickets. Or go to www.BroadwayTheatre.com. Tickets will move fast for this one just like the show.

If you’re fond of a caped mystery man in your life…If you’re enchanted by a wholesome soprano who’ll haunt your dreams,  this is the real Phantom to die for.