↓
Home Menu ↓
Home→Wrecking America’s Game Because They Do Not Understand it. Save Baseball Defensive Strategies, Please! Hello there, everybody, this is Bull Allen.

I’m sitting here in the open press box of memory, smoking hard on a White Owl Wallop with a Balentine Ale, the sweat dripping down the sides of the glass, the creamy white head revealing the ghosts of the past on the emense green of baseball’s cathedral, looking out on the emerald field of dreams lived past.

I am picking an old-fashioned rhubarb with the new “Commissioner” of Baseball. I am reading The New York  Times story in the sports section buried quite appropriately in the Business Day section, headlined,

Commissioner Considers the Shift, Gambling and that Collins Video.

And over here by the PIX tablemike, I’ve got the Washington Post AP dispatch all about how Rob Manfred, said he liked the idea of outlawing shifts to promote more hitting 3-1/2 years ago.

You can look it up at

Both articles deeply trouble me that the baseball owners and Mr. Manfred, the new commissioner would even consider such a handicapping of defensive baseball.

The AP writer points out how the current major league batting average is .245, the lowest since 1907 in the deadball era.

They want more action? Let me tell you Mr. Manfred, the most electrifying play in baseball is the great fielding play. The round-the-horn rally killer double play! The against the wall catch! The takeaway of a homer.

The intelligent positioning of your fielders depending on the situation in the game: guarding the line in the lates, holding the runner on; shortening up the infield with the go-ahead on third with less than 2 out; positioning players to the highest percentage of where a good hitter places the ball. 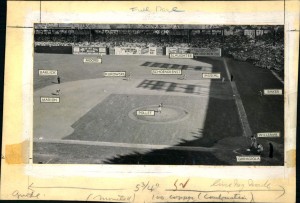 The first such shift was the Williams Shift, employed against a dead pull hitter, “Teddy Ballgame, The Greatest Hitter Who Ever Lived.” Ted was a pull hitter. The Cleveland Indians first deployed the shift against Williams in the 1940s. And in the photo above, you the
St. Louis Cardinals deploying it against Ted in the 1946 World Series. Below check out the diagram of the shift.

Now when Mr. Manfred says he wants to limit how much a team can shift to allow more hits, come on.

What are we going to do asterisk hits made after the “Manfred’s No Shift Rule.”

Will infielders and outfielders be told they can only take a straightway position?

Will outfielders, more to the point, be told they can not shift to left center and right center to the foul lines, or vice versa, allowing more “gappers?”

Will baseball in the same instant stupidity they used in bring in instant replay, have umpires review a play and turn Outs into hits if infielders, outfielders are judged to have shifted too much?

More to the point, will hits be  declared if limits on shifts are made standard by each position?

When people who do not know the game, make suggestions to change and are abetted by former players now in MLB administration start saying change is needed, this results in a disaster which makes the game nothing but a wait for a homer.

The NBA has become a game of getting hot with three-point shooting, as baseball is proceeding on a record home run pace.

However this means umpires might actually have rhubarbs, arguments again.

Will umpires perform a visual position check of every defensive player  before each at bat? How about that? That will really speed the game up, right Phil?

Despite Mr. Manfred’s opinion the great plays that are remembered are the plays that saved games— Second Baseman Bobby Richardson on the outfield grass in the 7th Game of the 1962 series off Willie McCovey—Wes Covington’s backhand stab of the Bobby Shantz liner in the 2nd game ot the 1957 series that saved Lou Burdette—Lou Piniella’s faking a catch in the 1978 playoff against the Red Sox that choked off the winning run.

Defense, not homers are the plays that are remembered.

As Wee Willie Keeler once said “Hit ’em where they ain’t.”