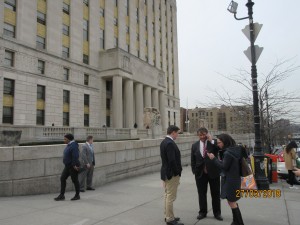 The first meeting between Westchester and Bronx leaders that anyone can remember took place this morning when Westchester County Executive George Latimer traveled to the Bronx County Courthouse for a working meeting with Bronx Borough President Ruben Diaz, Jr. 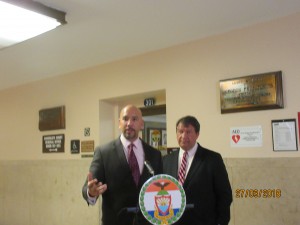 You can view the WPCNR Video of the News Conference at this link;MVI_6993

The two, both former New York State Assemblymen, now leaders of their respective “counties” met to define common grounds where their county interests and needs matched and where mutual strategies and lobbying government agencies for support would grow the thriving Bronx and Westchester economies.

In a news conference after the  approximately two hour meeting, the two leaders told assembled reporters  the two looked forward to promote and attract businesses and projects to the Bronx Westchester area.

Mr. Latimer said as soon as his economic growth team was in place, partnering to promote the Bronx-Westchester economic advantages to possible businesses and developers would be his economic team’s first priority.

Mr. Diaz said he looked forward to working with Mr. Latimer to promote entertainment, shopping and attractions (such as Van Cortlandt Park) to Westchester residents. He noted the Kingsbridge Armory Skating was a destination that would be attractive to Westchester hockey, figure skating enthusiasts, and recreational skaters.
Mr. Latimer said he would explore more ways such as transit improvement and promotions to bring Bronx residents to Playland Park this summer.  Mr. Diaz was very enthusiastic about this possibility, saying that was where his parents took him when he was a child growing up.

The news conference already has helped Westchester in a traffic heads-up:

Asked if the Major Deegan Expressway northbound construction just before the 161st street Yankee Stadium ramp, where there are just two northbound lanes open  would be completed before Opening Day, Mr. Diaz said he did not expect them to be.

This is very bad news for Yankee fans for opening day.

The smartest route to Yankee Stadium used to be Brucker Expressway to the Deegan Northbound, and exiting at 149th Street, and grabbing the easy park lots leading to the Stadium, averting the “parking lot stretching from the Deegan Southbound Stadium exit to  almost Westchester County.

Today, due to the one lane closure just before 161st Street Northbound, it was bumper to bumper northbound, south of 161st to about 149th Street. This with no ballgame going on. Monday is going to be worst Bronx traffic jam ever, unless the DOT opens that lane.

Mr. Latimer urged people to take the Metro North trains to the game.