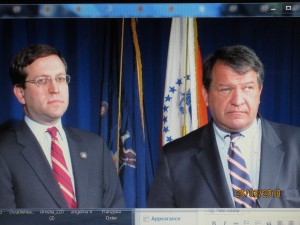 The full press conference can be seen HERE.

The two officials took the reactions of 70 towns and city leaders over two hours at Westchester County Center March 23.

Latimer said they would  present the leaders’ priorities  to the Public Service Commission of what was wrong with the  Con Ed and New York State Electric and Gas paralyzing slow response to the high wind rainstorm March 2 and snowstorm March 7 that pummeled Westchester County the first week of March.

Latimer said the county leaders were surveyed to put together changes  Con Ed and NYSEG must make, to, in Mr. Latimer’s stern words “make sure this (delay in restoration response) never happens again.”

Once the results of the surveys of the leaders are tallied, and put in a workable format, definite next steps will be taken.

Mr. Latimer said he wanted communications with the county and affkicted communities to improve dramatically. He said the robocall system to notify customers when they would be restored was ineffective and had to be fixed to reflect realities on the ground. Latimer was highly critical of the Con Ed online outage maps which did not reflect “real time” for city and town governments or customers.

Asked if the county had an idea of how much money sanctions the Public Service Commission should fine Con Ed and NYSEG, he said it was too early to tell, that it was up to the PSC.

He was asked if he supported the establishment by Con Ed and NYSEG of  a standby auxiliary force of trucks and crews ready to spring into action in the New York area as suggested by County Legislator Mike Kaplowitz  as an always-ready-to-deploy power restoratioin force.

Latimer gave a hesitant yes, but also said Con Edison had not been forthcoming as to how many crews and equipment would have to comprise such a “Switch-on Force” to enable faster on-the scene-response to cut  turn-back-on time. He said the delay in the arrival of mutual aid repair crews and trucks from out of states showed the present mutual aid system needs to be looked at.

Latimer stressed the county wanted to work cooperatively with Con Edison and NYSEG and that the chief executives of both companies had expressed willingness to do so.

Latimer said he hoped the two power companies would hold news conferences soon to say what they thought could do  and would do to improve the situation.