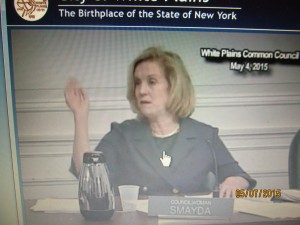 The League of Women Voters of White Plains will present their Civic Engagement Award to Beth Smayda. The award will be presented from 3 – 5 p.m. at  the home of Janice Abbott and Richard Benjamin 177 Soundview Avenue in White Plains.

A public finance professional for over twenty-five years, Beth was elected to the White Plains Common Council in 2009 and began serving as a councilwoman in January 2010. She was Chair of the City Budget and Management Advisory Committee throughout her eight years on the Council and was chosen by her Council to be Council President in 2012 and 2013.

Beth has a long history of involvement in the
White Plains community, having served as a past
President of the White Plains League of Women
Voters, Chair of the League’s City Budget
Committee for twenty years and Chair of the City Government Committee.She also served on the White Plains PTA Council, chairing the School Budget and Legislation Committees, work for which she received the PTA Jenkins Award.

Beth’s public finance career began at Moody’s Investors Service after working as a researcher on intergovernmental and local government financial issues for the New York State Legislative Commission on State Local Relations. At Moody’s she was an Assistant Vice President in the Northeast Group.

She then went to MBIA where she worked for 18 years analyzing, marketing, executing, monitoring, and remediating municipal bond transactions. At MBIA she managed the Public Finance Enterprise Insured Portfolio Management Group, headed up the Armonk office of the Public Finance Western New Business Group, and was Managing Director and Head of the Healthcare New Business Group. Beth then went to BondFactor Company as Managing Director and is now a Director at the ACA Financial Guaranty Corporation.

In 2006 Beth co-founded the Northeast Woman in Public Finance
(NEWPF), a network of 1,000+ women from all fields in the public finance
industry. She served as Co-President through 2012 and was named in
December 2013 as a Trailblazing Woman in Public Finance by the Bond
Buyer. She has been a long-time member of the Municipal Analysts of
New York.

Beth received her Bachelor of Arts in Political Science and Public
Administration from Augustana College, Rock Island, Illinois and a Master
of Public Affairs from the LBJ School of Public Affairs, University of Texas,
Austin, TX.