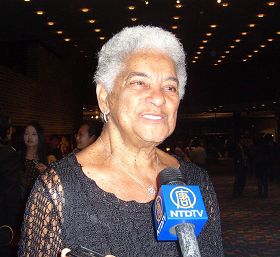 Lois Bronz passed away on Monday February 12, 2018. Lois was born August 20, 1927. Born and raised in New Orleans Louisiana, she attended St Mary’s Academy and received her bachelors’ degree at Xavier University New Orleans, and a Masters degree in Education from Wayne State University.

Augmenting a long career as an educator, math teacher at every level from K-12 through College/University, Lois had a long career in civic activism and politics.

Her father’s interest in politics stirred in her a healthy curiosity in politics and avid advocacy for citizen participation in government. She became active in voter registration and founded the League of Good Government in New Orleans.

Elected to the Greenburgh Town Board in 1976, she went on to become the first African American Woman elected to the Westchester County Board of Legislators in 1993. Later elected as chair in 2002, she then served on the Board until 2009. Legislator Bronz was most proud of her leadership in getting the landmark legislation passed that created the Westchester County Human Rights Commission. She considered “affordable housing” her middle name.

Lois was the loving wife of fifty years to the late Charles Bronz. Besides her loving friends and community Lois is survived by her son Edgar Louis Jr., his wife Mary Irene, Lois’ daughter Francine, four grandchildren: Dorian, Nora Eloise, Edgar Louis III, and Gyasi, and one great grandchild Micah, and a host of nieces and nephews. Her daughter Shelly preceded her in death.

Donations can be made to The Lois Bronz Children’s Center, 30 Manhattan Avenue, White Plains, New York 10607