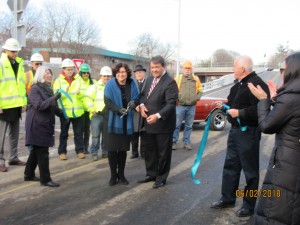 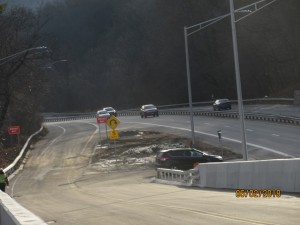 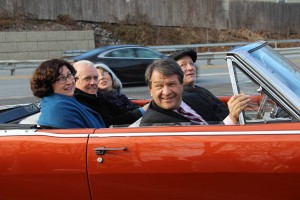 Motorists are advised that the entrance/exit ramp (exit 17) to the northbound Saw Mill River Parkway at Ashford Avenue in Ardsley and Dobbs Ferry has reopened today, approximately four months ahead of schedule.  The ramp reconstruction is part of the Ashford Avenue Bridge and Ramp Rehabilitation Project.  The ramp was previously closed on March 14, 2016.

The ramp opening indicates a substantial completion of the project with major items of work completed.  Several weeks ago, the final stage, Stage 3, of construction, commenced with Ashford Avenue restored to four lanes, with two lanes in each direction during peak hours.

The $17.9 million project to fully rehabilitate the Ashford Avenue Bridge and Ramp along the border of Ardsley and Dobbs Ferry started pre-construction on January 4, 2016, and began impacting traffic on March 1, 2016 with off-peak lane closures on Ashford Avenue, the Saw Mill River Parkway and the New York State Thruway (I-87).  It is estimated that the entire project will be completed by this summer.

Shimsky said the bridge and ramp were deemed unsafe about 2008, when concrete fell from underneath the bridge. No progress to  repair the bottleneck that essentialy cut the rivertowns of Irvington, Dobbs Ferry and Hastings off from entering the Saw Mill Parkway north without going south or north first began until 2015.

Bumper to bumber  morning and  evening bottlenecks were created from about 3 o’clock on for years creating chronic delays westbound and eastbound on Dobbs Ferry Road as the Saw Mill could not be accessed northbound at the critical bridge.

Hopefully this will now be a thing of the past.

In his brief remarks, County Executive George Latimer said the county is reviewing capital projects and what needs be looked at as the top priorities, as well as how to fund them. He said a sequence of priority infrastructure projects had not been decided upon at this time. He hoped that federal and state aid might be found to tackle priority projects.