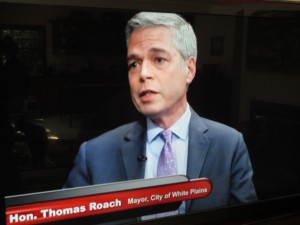 Clips of Mayor Tom Roach’s State of the City Comments to the White Plains Council of Neighborhood Associations Tuesday will be shown tonight on White Plains Week at 7:30 PM on Verizon Fios Channel 45 and Altice Cablevision Channel 76 and on the internet at www.wpcommunitymedia.org.

White Plains Mayor Tom Roach paid his annual visit to the White Plains Council of Neighborhood Associations Tuesday evening, and said the city was in good position to deliver what the millennial generation wants: walkable city without the necessity to drive everywhere.

He announced Metro North had announced they would build a new train station facility and the city was involved in Metro North’s planning for the station, disclosing no details about how the station was being developed and what the station would incorporate.

He was proud the city got nine submissions from potential developers of the four city-owned parcels on the eastern side of the station and said the city was now awaiting proposals from them.

The Grid former Sholz property had reached an agreement with a major anchor tenant which he said would be announced when the deal is complete and financing for the project could be obtained.

He said the Lennar project which as razed the former Pavilion mall was coming back to the city with a new design change in the project, that was not exactly clear  what it involved.

He said that projects already approved were not proceeding until financing was obtained, due to the changing retail market, but did not give details, one such project, he said is  the refurbishing of the Esplanade that was in progress but now in the process of securing financing to proceed with that interior conversion to apartments.

He said the city bond rating was stable and unchanged. He said the new parking “ap” now accounted for 25% of Parking revenues, considering it a success and that parking revenue was up and tickets were down.

He said the movie-tv production business was up in White Plains, and heartily recommended The Post movie which was shot almost entirely in White Plains.

You can see some of the Mayor’s remarks on White Plains Week this evening at 7:30 PM county-wide on Verizon Fios ch. 76 and Altice-Cablevision Channel 76 and on the internet at www.whiteplainsweek.com, youtube and www.wpcommunitymedia.org (live and after the show).