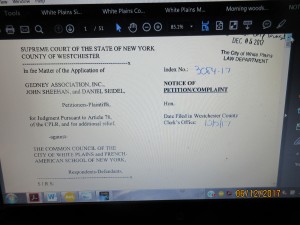 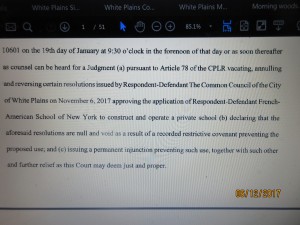 The basis of the suit, persons familiar with the papers say, is that by law entities are not allowed to develop sites incrementally, a process known as segmentation.

In approving the 5-2 decision Councilwoman Nadine Hunt-Robinson (delivering the all important fifth vote) stated in her public statement that a 15 year moratorium on developing or doing anything with the sites other than parcel A was sufficient reason to allow the project to proceed to judge the impacts of any possible future development after the present project is built. She had originally suggested a 50 year ban on developing the other parcels.

Ms. Hunt-Robinson also said the scholarships the school has promised were a benefit to the community. The Gedney Association suit also  objects to this as a questionable reason for the city to approve the project.

The case is scheduled to be heard by Judge Susan Cacace on January 19. Persons familiar with the matter told WPCNR Cacace would have 60 days to review the complaint. The suit is not a Show Cause or request for a Temporary Restraining Order. It asks the court to deny the Common Council vote.

One of the plaintiffs in the suit, though does own property next to the golf course, and presents evidence that their property values will be directly affected should the school be allowed to develop the properties adjacent their home ( parcels not now planned for development),in the future (raising the alleged segmentation issue.)

More details to come, as WPCNR continues to go over the 39-page filing.