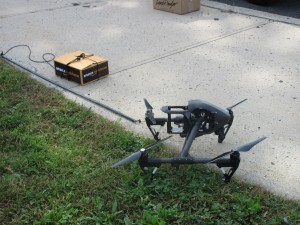 An “AstorinoCraft” drone flown by BlueRayUVA.com stood ready to “deliver Amazon” to start today’s County Executive News Conference announcing the county intention to submit an 8-page proposal to New York State, that is partnering with the County to ready a proposal for the Amazon second headquarters, a 500,000 square foot facility that is predicted to bring in $5 Billion in investment and 50,000 jobs averaging over $100,000 apiece, the County Executive said 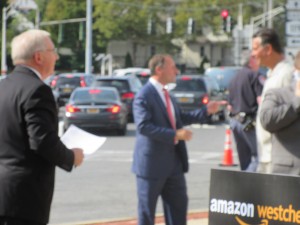 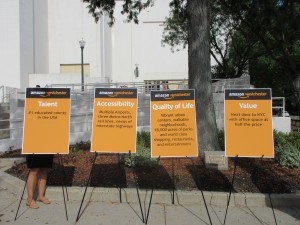 Mr. Astorino noted that the county has two vacant office complexes in Somers, consisting of 1.5 Million square footage between the two complexes which are conveniently adjacent to each other,according to Somers Town Supervisor Rick Morrissey, who  characterized them as “move-in” ready.

Bill Mooney addressing the media contingent said White Plains was another area with 2 million square footage of office space vacant along both sides of Interstate 287. Other cities mentioned as possibilities other than Scarsdale and White Plains for Amazon selection were New Rochelle, Mount Vernon and Yonkers.

Ned McCormack, Communications Director for Westchester County told WPCNR the county had first heard of the Amazon opportunity two weeks ago when it was first announced, and immediately assembled a team to respond to the proposal with Westchester County possibilities.

Asked by WPCNR if Governor Andrew Cuomo was favorable to the plan for relocating Amazon in Westchester, Astorino said the county was working with the state on the county proposal, but that he, Astorino had not spoken to the Governor about it yet.

George Oros, the Director of Economic Development introduced the vast team of persons working on the proposal.