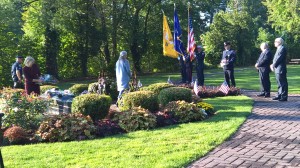 In Liberty Park this morning, members of the White Plains Common Council lay wreaths on the memorial to the six White Plains residents who died in the September 11 World Trade Center attack sixteen years ago.

The City of White Plains held its annual remembrance today of the World Trade Center loss and those who died in that attack sixteen years ago this morning. 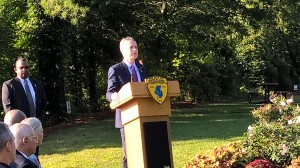 Mayor Thomas Roach (above) remembered it was a day just like this morning, clear, crisp,  beautiful when the attack came.

He said there was no way we could make up or get over the loss of the six White Plains citizens and thousands of others who died,  but that we should all remember each of the 9/11 dead had perhaps a child, a parent, loved ones who depended on them.

The Mayor said “We have the commitment to comfort that child, help the family of that person” to in no way replace the person lost, but “to help someone who needs  help, not moving on, but moving forward.”  It was a positive message to deal with the remembrance of loss and the lifelong process of building  despite the loss.

Poems were read by a White Plains Police Officer, and a White Plains fireman, conveying the way “we all became one” on that day, today, 16 years ago.

Wreathes were laid by members of the Common Council  on the marble slab engraved with the names of the White Plains dead. Mr. Mosley closed the ceremony with a goose-bumping, exhilarating performance of God Bless America, his voice ringing out across Silver Lake and rising to the Heavens. 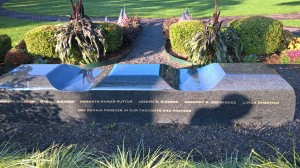