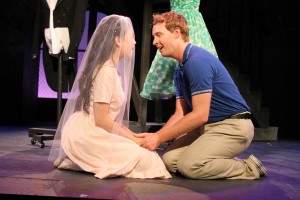 Lauren Langbaum as Maria and James Mernin as Tony sing One Hand, One Heart

Setting the time machine on the dynamal veeberfetzer and letting the time slide roll as Deejay Bob Lewis used to say on WINS 1010, 1958 was a time in NYC when teen gangs of youth without much futures due to their poverty fought each other over street territory in Brooklyn, Queens ,the East Side and the West Side. It was an era of chains, zip guns and switch-blades. They rumbled, committed petty crimes, were hassled by law enforcement and considered undesirables, particularly if you were Italian, or Puerto Rican or Black and everyone who was poor. Somehow this seems all too familiar when we think on the intolerance of latinos, Muslims,  immigrants, blacks, the poor today. Tolerance is better and worse.

WPPAC’s Stage 2 program staged its fifth annual production last night, and gives us five more productions of this West Side Story: Saturday night tonight, Sunday the 30th, and Friday August 4, Saturday August 5, and Sunday August 6. Stage 2 brings very talented youths who are local and from around the country to its productions. Stage 2 “bridges the gap between WPPAC’s Conservatory youth theatre program and Mainstage professional theatre, giving college and local community performers over 18, non-union actors and talented rising high school juniors and seniors are part of their productions.

Tony meets Maria at a dance and is so smitten, he sings Maria  all the way home. He even follows her home and they duet on Tonight. Their chemistry continues to charm the show. This whirlwind romance between an Italian and a Puerto Rican girl plays out against a simmering gang feud. 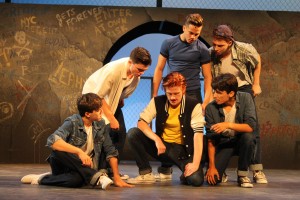 The growling animosity between the gangs Sharks (Puerto Ricans) and The Jets (Italians) bursts into a rumble at the end of Act I leaving the leaders of both gangs dead.  Riff,(Carson Stewart) captures the attitude of the typical tough guy teenager of the era, obsessed, seeing the Sharks as a threat to his neighborhood. Bernardo, Rafa Reyes is more conciliatory as the Shark leader, but reacts to the Jets’ harrassment. 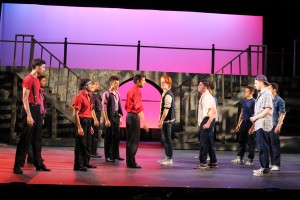 The Rumble: The Sharks on the left. The Jets on the Right. Bernardo (Rafa Reyes) Leader of the Sharks confronts Riff (Carson Stewart) as the Rumble begins.

Tony former member of the Jets is attempting to break up a rumble, and in doing so is angered and avenging the stabbing of Riff by Maria’s brother, Bernardo (played with elan, menace and macho by Rafa Reyes, a graduate of AMDA New York),stabs Bernardo in retaliation.

The second act simmers and ascends in intensity and hope against hopelessness with the lovers Maria (given flight by the articulate soprano highs of Lauren Langbaum, (wait til you hear her unique “trills” on I Feel Pretty,a unique styling of this song that I feel is a creation of her own. I’ve never heard that number executed with trills on the “r’s”) and Tony (James Mernin).

Mernin and Langbaum  combine for two beautiful duets Somewhere (There’s a Place for Us) and again on One Hand, One Heart. You will yearn and hope for them and that is a good thing. They make you pine for their happiness. Mernin’s tenor blends entwining with Ms. Langbaum like two smooth silks to heart smack you with their heartbreak combined with optimism.

Alexandra Imbrosci-Viera, 2012 Graduate of White Plains High School, is the dead Shark leader Bernardo’s girl friend Anita. When Tony kills Bernardo she delivers the chilling lament  A Man Like That (Stay with Your Own Kind) Ms. Imbrosci-Viera’s mocking  contralto reveals bitterness that Maria’s love for Tony the Italian boy, has cost Anita her love. She sings A Man Like That in the Cole Porter style of Love for Sale, making lyrics  land blows to the hearts of Maria and audience alike.

Ms.  Langbaum answers Ms. Imbrosci-Viera with the hopeless but universal truth about  love, I Have a Love. Langbaum and Imbrosci-Viera comfort each other and sing it together in heartbreak touching the audience with this gem.

The second act delivers commentary on why Jets behave like Jets, when Max Temkin as A-Rab, a junior at NYU Tisch School of the Arts, and Casey Dath, junior at Putnam Valley High, and several Jets deliver Brenda Starr’s (Ms. Starr was the redhead I went with to the show) favorite  West Side Story song   Gee,Officer Krupke.

The self-proclaimed delinquents point out why they act like they do “but I’m good inside.” This song is blessed comic relief with a message amidst the unbearable drama of Shark Member Chino’s hunt to kill Tony, but the song says a lot about how hopelessness and how children are treated rob them of their ability to rise above and be successful. This was a mugging, amusing sequence handled with great comic timing by Temkin and Dath.

The police lieutenant Shrank played  by John Cedric Larson, a resident of White Plains delivers smoldering lines at the gang members, disrespecting them as police did back then in the 1950s. His is a short but appropriately chilling piece of commentary, demonstrating and letting the audience feel how disrespect feels when it is done to you. 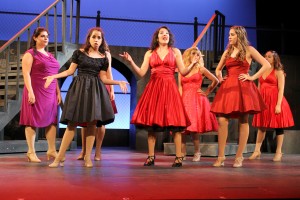 I have to comment on Ms. Alexandra Imbroscio-Viera’s performing of America with her Latino girl friends. She plays off beautifully with the droll and deadpan Jenna San Antonio  as Rosalia who misses Puerto Rico. Ms. San Antonio sings the straight lines to Anita like this “When I go back to San Juan, they will stand up and cheer.” To which Imbroscio-Viera sings. “They can’t they’re all here.” San Antonio also executes great acrobatic moves dancing in this number

Ms. Imbroscio-Vera has the most difficult acting sequence in the play. The Jets, guarding Tony, mock taunt and attack her, prompting her to betray Tony creating his doom. The attack and Ms. Imbroscio-Vera’sproud reaction to of petulance, desire to get even with the Jets) demonstrates how even a person seeking to do good like Anita can be turned away from her better nature by desire for vengeance. Her shocking betrayal drives Tony into searching for Chino who is out to get him.

The finale of WSS is uplifting and features a shocking moment as well as Tony’s death. Ms.  Langbaum’s Maria grows as a character when confronted with Tony’s fate, seeming to walk taller, stand straighter, become stronger as both gangs carry Tony away.

The brilliantly staged lingering procession Director Joseph Walsh  has crafted to send  theatre goers out into the night gives a message we can all use today: disdaining revenge, forgiving, and refusing to blame others not like us for our plight must be fought. The procession is very moving. It portrays the end of a life and the emptiness of that end with tenderness, regret, and catharsis.

The use of the set that transforms a street lot into a balcony, a bedroom, a dress shop, a corner soda fountain with deftly fluent and efficient speed was designed by Scott Aronow.

West Side Story plays two more days this weekend and three days next week. The box office may be reached at 914-328-1600 or the website, wppac.com.

Joseph Walsh, the director talks about his production on this week’s White Plains Television People to Be Heard Saturday night at 7 on Altice Cablevision channel 76 and countywide on Verizon Fios Channel 45. You may also see the interview anytime on Youtube at