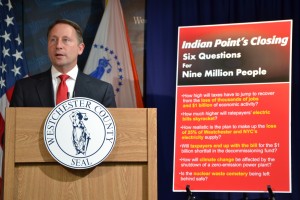 Westchester County Executive Robert P. Astorino announcing his personal lawsuits against the state, Entergy and Riverkeeper to force an environmental review of the effects of the planned Indian Point closure by 2021. Photo, Courtesy Westchester County Dept of Communications

WPCNR COUNTY CLARION-LEDGER. From the Westchester County Department of Communications. (Edited) May 10, 2017:

Westchester County Executive Robert P. Astorino filed two personal lawsuits Tuesday to ensure that any actions to close the Indian Point nuclear power plant alongside the Hudson River in the Village of Buchanan fully comply with the state’s environmental laws and protect taxpayers, ratepayers and jobs.

“When the Democrats on the Board of Legislators decided to abandon their responsibility of protecting our local communities, I decided to act on my own. The stakes are too high not to ensure every possible step is taken to make sure our county and local communities are not left defenseless against the power of the state and wealthy special interest groups. The second lawsuit will give others time to join our effort to hold the state accountable for enforcing our environmental laws for the benefit of the public.” Mr. Astorino said in a News Conference.

To View the Video of Mr. Astorino’s News Conference Tuesday go to this link:

“Our lawsuit has nothing to do with the debate over nuclear energy,” said Astorino at a press conference at his office in White Plains. “It has to do with safety and the rule of law. Ultimately, the issue isn’t whether Indian Point stays open. It’s that any plan to close the plant must fully comply with the law. If our environmental laws are to mean anything, then surely they must apply to the closing of a nuclear power plant that affects the lives and livelihoods of nine million New Yorkers. If ever there was a case for the State Environmental Quality Review Act to be enforced, this is it.”

The case is simple, Astorino outlined:  The state failed, as the record clearly shows, to meet its obligations under SEQRA to conduct environmental reviews before it announced its decision in January to close Indian Point. By moving forward on the closure without the required environmental reviews, the state put the public at risk by failing to examine:

“Even those who applaud the closing of Indian Point should be deeply concerned about how it is being done and the environmental and economic aftershocks to come,” said Astorino.

SEQRA is triggered for almost every basic public project, such as building pools, roads, playgrounds, purchasing computers and even renaming county facilities.  Astorino said the state is ignoring the law when it comes to one of the biggest environmental decisions in New York’s history – the closing of a nuclear plant.

“Asking us to trust them defies common sense and basic logic,” said Astorino. “To say closing the plant has no significant impact would be laughable if the consequences weren’t so critical.”

Astorino commented on the Task Forces the Governor assembled to look at the consequences of closing Indian Point, after the decision was made.

“First of all, the questions now being looked at by the Task Forces all should have been asked and answered before the state decided to close Indian Point,” Astorino said.

“And what confidence can the public have in these Task Forces since they are accountable only to the Governor, have no weight of law behind them and their recommendations can be ignored. This is not how open and transparent government is supposed to work.”

The reason for Astorino’s two-lawsuit approach is to deal with the statute of limitations.

His challenge aimed at the Closure Agreement by the state, Entergy and Riverkeeper had to be filed Tuesday.

The second suit, faulting the state’s actions in issuing a water quality permit, was also filed today but does not have to be finalized until Aug. 24, 2017, which will allow others to join it.

“When the Democrats on the Board of Legislators decided to abandon their responsibility of protecting our local communities, I decided to act on my own. The stakes are too high not to ensure every possible step is taken to make sure our county and local communities are not left defenseless against the power of the state and wealthy special interest groups. The second lawsuit will give others time to join our effort to hold the state accountable for enforcing our environmental laws for the benefit of the public.” 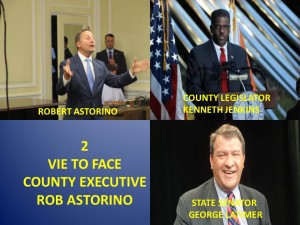 The Democratic candidates for the nomination to run against Mr. Astorino wasted no time in criticizing the Astorino double suit:

State Senator George Latimer weighed in with this comment:

“Filing a lawsuit that will not add one cent of needed revenue to the Village of Buchanan, the Town of Cortlandt or the Hendrick Hudson School District, is the height of playing politics. It’s ‘good politics’ if you’re running for the Republican nomination for Governor, but if you intend to be County Executive for the next four years, you should be meeting with New York State officials to hammer out a plan to deal with the real world problems these communities are facing. It’s one more example of how Rob has made making headlines more important than making headway on solving this problem.”

Astorino’s lawsuit will be litigated by Philip Halpern, one of New York’s preeminent trial attorneys with more than three decades of experience and the managing partner of the firm Collier, Halpern, Newberg & Nolletti, LLP. There will be no costs to the county unless approved by the Board of Legislators.