↓
Home Menu ↓
Home→PETER KATZ REPORT NOW AVAILABLE ON YOU TUBE SEE LINK BELOW. FASNY SUPER HEARING GOES INTO THE NIGHT. ENDS AT 11 PM. 125 WAIT TO HAVE THEIR 5 MINUTES OF “SAY” 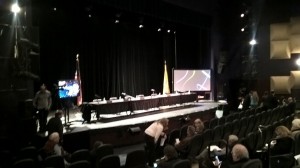 The Common Council Dais setup on stage at the White Plains Performing Arts Center awaited its Councilpersons slightly before 6 PM Wednesday evening for their apparently final hearing before a vote on the French American School of New York which could be held after 10 days, the final chance to comment on the controversial school proposal to build a school campus complex on the Ridgeway Avenue side of the former Ridgeway Country Club. The process of approval or denial has lasted six years.

UPDATED: PETER KATZ HAS PUT TOGETHER A VIDEO REPORT OF SOME OF THE HIGHLIGHTS OF WEDNESDAY NIGHT’S MEETING WHICH IS AVAILABLE ON YOUTUBE AT THIS LINK: https://youtu.be/j61B6ew_H6Q

WHITE PLAINS TELEVISION ANNOUNCED THURSDAY MORNING THEY EXPECTED TO HAVE A 5 HOUR TAPE OF THE PROCEEDINGS AVAILABLE ON THE CITY OF WHITE PLAINS WEBSITE AND ON www.wpcommunitymedia.org  FRIDAY MORNING 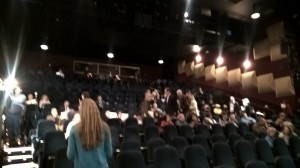 Citizens to be heard on the FASNY issue filed in about 5:40 PM  having had to sign up to speak. It was said some 60 persons had signed up to speak, and 3 hours later after the public started speaking, it was still going on. 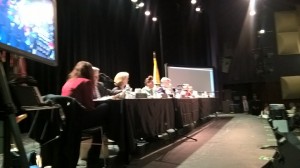 Mayor Thomas Roach (to right of yellow City of White Plains flag) opened the Hearing on schedule at 6, reading the ground rules for speakers. 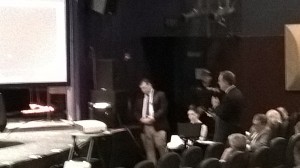 The French American School of New York was first up, present two school administrators who extolled the reputation and philosophy of the school, and presented a video. Michael Zarin, attorney for the school throughout the six years of this review, presented how the project had change. He also showed excerpts from the original 6-1 decision that the effects of the French American School campus could be mitigated, where the city in its decision allowed that the parcel A was not environmentally sensitive, which has been the basis apparently for the FASNY contention that the Parcel A was not environmentally sensitive and should be approved for construction of their alternate site plan