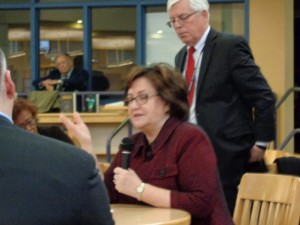 “The Regents and I are committed to continuously improving our standards, our curriculum and our assessments,” State Education Commissioner MaryEllen Elia said. “Since my first day on the job a little over a year ago, I’ve been listening to parents, teachers, school administrators and the public – seeking their expertise on how we can improve. We’ve taken their advice and made important changes to the exams. It’s an ongoing process, but better standards, better curriculum and better tests will result in better student outcomes.”

“The Regents, Commissioner and I have worked hard to make New York’s assessments the best they can be for our students,” Board of Regents Chancellor Betty A. Rosa said. “I’ve always said that tests must be diagnostic, valid and reliable while providing timely and practical information to parents and teachers. We made important changes to the assessments this year and we’re going to continue to look at ways to make them even better moving forward. While it’s not possible to make direct comparisons of this year’s results to past years, I’m cautiously optimistic the changes we’re making will drive improvements in teaching and learning.”

SED made several changes to the 2016 ELA and math exams through a deliberate process. These changes included: starting with a new test vendor with a contract that required greater teacher involvement; reducing the number of questions on every grade 3-8 ELA and math assessments; and allowing students who are productively working to complete their exams.

In addition, SED released more test questions than ever before and earlier than ever before to support instruction. Further, when parents receive their child’s school reports later this summer, they will see that they are easier to understand and provide more information on how their child performed.

This year’s changes to the tests are part of a multi-year process that started with the Board of Regents’ Test Improvement Report in June 2015 and then solicited feedback from parents, teachers, administrators and students. The process included making recommendations(link is external) as part of Governor’s Task Force and presenting the final changes to the Board of Regents in December 2015. SED implemented the changes in time for the spring 2016 exams.

While the content of the 2016 tests and last year’s tests are comparable and similarly rigorous, it is not possible to make direct comparisons of the 2016 results to prior years’ results because of changes to the tests this year. The 2016 results are valid and reliable indicators of student proficiency in the tested grades and subjects.

In ELA this year, the percentage of all test takers in grades 3-8 who scored at the proficient level increased over last year in each of the Big 5 City School Districts. New York City’s proficiency increased by 7.6 percentage points to 38 percent. For the first time, New York City now meets the rest of the state in proficiency in English Language Arts

Proficiency on the math exam statewide and in New York City also increased for black and Hispanic students in math this year, however, less than in ELA.

Statewide in ELA, proficiency increased for both “Ever ELLs” (students who received ELL services prior to but not during the 2015-16 school year) and “Never ELLs” (students who never received ELL services). Ever ELL students performing at the proficiency level increased by 9 percentage points this year while Ever ELLs outperformed all grade 3-8 test takers combined, statewide.

Student proficiency on the ELA exam went up the most in grades 3 and 4 this year. Statewide, the percentage of third graders who scored at the proficient level increased by 10.9 percentage points over last year while fourth graders experienced an 8.1-percentage-point increase.

While one reason for the increases cannot be pinpointed, a variety of factors may have contributed. In response to feedback received from stakeholders across the state, the Department made a number of changes to the Grades 3-8 assessments this year including reducing the number of test questions on every assessment and allowing students who were working productively to complete their exams without time constraints. Further, teachers have had an additional year of experience with, and professional development in, the State’s higher learning standards. That added comfort and experience may have resulted in greater levels of student proficiency.

This year SED, in collaboration with the Regional Information Centers, improved its data collection methods and can now provide Test Refusal data.  This year, the test refusal rate was approximately 21 percent, which is relatively flat with last year. A Test Refusal file by school district will be available online later today at:  http://www.p12.nysed.gov/irs.

Department data shows about 50 percent of the test refusal students this year did not participate in 2015.

Like last year, this year’s proficiency rates represent the 900,000 students who actually took the test. There is no statewide measure of knowledge and skill for those students who refused the test.

A summary of the test results, as well as individual school and district results, will be available later today at: http://data.nysed.gov.

Video and Audio of Commissioner Elia are available for download.