The new owners  of the former Good Counsel Property at 52 North Broadway, George Comfort & Sons, Inc. and ROC Group, Inc.  unveiled their preliminary development concept Monday evening at the Common Council Special Meeting, calling for a preservation of the 3 acres of North Broadway great lawn while opening the former campus to a mix of residential uses.

The proposed development includes a 66 person Pace Law School Graduate Student privately managed residential building on the north side of the property; a new 130 person (including 29 units for memory loss residents) Sunrise Assisted Living project on the southern side of the campus, and a 10 story market rate rental complex on the eastern border of the property overlooking the Cross Westchester Expressway. 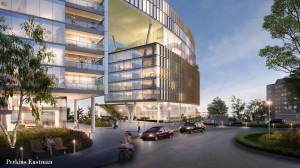 The residential building (a portion of which is shown above) proposes a zoning change allowing a 10 story complex with parking underneath the sweeping curve of the building. A total of 402 apartments including 40 affordable housing units, is planned at this time at market rates.

The Assisted Living building would be two stories with three stories in the rear with 50 parking spaces around the driveway. 131 residents would live in the assisted living complex, with 29 of them reserved for the memory-impaired 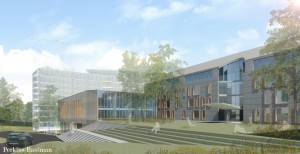 The new proposed PACE UNIVERSITY LAW SCHOOL PROPOSED GRADUATE STUDENT LIVING COMPLEX would be built on the north side of the campus and consist of 3 stories with a sstudent residential complex housing 66 students. It would be privately managed. (Renderings,Courtesy of Perkins Eastman)