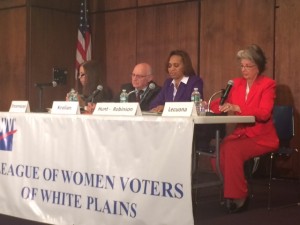 On October 7, 2015, the candidates for the upcoming White Plains Common Council election, incumbents Nadine Hunt-Robinson, Dennis Krolian and Milagros Lecuona and challenger Annemarie Encarnacao as well as candidate for County Legislator Ben Boykin met at the Woman’s Club of White Plains for a question and answer session on the pertinent issues.

Questions were submitted by the moderators as well as from the attendees.  At the end of the meeting, questions were taken from the floor directly. An audience of sixty five residents attended the event including Councilman John Fitzpatrick.

The incumbents were initially asked what they felt was their biggest accomplishment in the past year.

Ms. Hunt-Robinson and Mr. Krolian felt that finally voting on the FASNY issue was the one while Ms. Lecuona and Mr. Boykin felt passing a budget had been theirs.

Mr. Boykin cautioned that this will also be a big issue in the upcoming year on the county level. Because extensive budget cuts are threatened, it will be a challenge to save money while preserving services.

Amongst the issues discussed, the question of transparency in government and requests for information from officials was raised several times.

The candidates all stated that if asked they would be more than happy to turn over whatever information was in their power to do so but pointed out that even they are not able to access everything.

She pointed out several issues that make White Plains less desirable – the homeless on the streets, the aggressive parking policy of the city, safety concerns and the many empty storefronts in downtown White Plains.  She reminded the council that the needs of the residential community need to be addressed, not just the needs of corporations.

All the candidates agreed there needs to be a revisiting of the strategic/comprehensive plan for the city to make White Plains a more desirable place to live and work going forward.

The issue of the homeless is of great concern to many residents.

People from homeless shelters are bussed into White Plains (as well as Yonkers and New Rochelle) during the day.  In addition there are several homeless shelters in White Plains. A new shelter ‘’Open Arms” has just opened but only accepts people with no medical problems and they can only stay for 45 days. A member of the audience stated that budget cuts in past years have reduced the available services for the homeless and so there are fewer options for them.

Citizens are concerned with the aggressive parking tickets being issued by the City of White Plains, not only for overtime notices but for parking over the line or parking too far from the curb. Exorbitant fines accompany these tickets and discourage people from shopping downtown.

Ms. Encarnacao suggested a residential parking pass for all White Plains residents that would allow them to park downtown for a specified period of time.  Ms. Hunt-Robinson reminded everyone that the city does have a permit which allows parking in certain garages during specified hours in the evening and on weekends.

A question was asked regarding the impending installation of red light cameras at various intersections. (No timetable for installation has been set.)

Mr. Krolian stated that the intent of the cameras is safety, not revenues. Ms. Encarnacao stated that if you aren’t running a red light, you have nothing to be worried about.

The council members stated that there would be adequate investigation into where the appropriate place for the cameras would be.  Some attendees questioned why traffic lights are not synchronized.  Ms. Hunt Robinson explained that while synchronization cuts down on exhaust fumes, it may encourage speeding.

Questions were also asked regarding more open space and plans for a Veterans Park (in Battle Hill– an issue talked about for the last seventeen years).

Ms. Lecuona mentioned her experience in urban planning and stated she had drawn up a plan for a Veterans Park on Tarrytown Road on a tract of land designated for this seventeen years ago.  Mr. Krolian pointed out that the new transportation hub would likely include this area and so plans for the park would need to be incorporated into that.

Finally a question was asked regarding the new mechanized garbage/recycling trucks.  It is difficult for many disabled and elderly to put the new containers to the curb.

Council members said this issue is being looked into but in the interim suggested getting help from a neighbor or family member and referred the individual to Aging in Place.

The election will be held on November 3, 2015. The three incumbents from the Common Council and Republican candidate are competing for three seats.  Mr. Boykin is running unopposed for County Legislator.