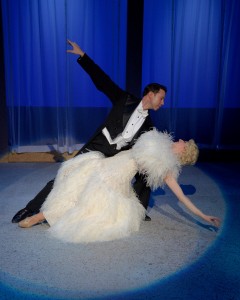 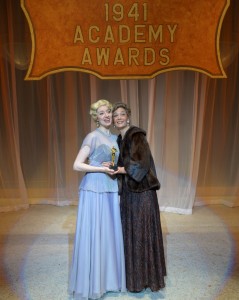 From the first announcement of Ginger Rogers 1941 Academy Award to the triumphant  close,  Ginger’s  thank you speech for the award and ode to her mother, Lela played with a sensitivity by Erika Amato (above with Ms.Crago) every mother and Dad will standup and cheer. Ms. Amato’s credibility and “mothering reality” made the conflict of the show work, and she showed pitch perfect feeling on her big solo, You’ll Never Know. 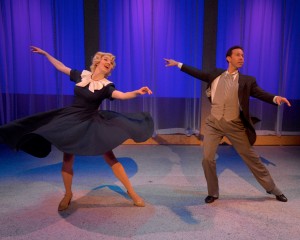 From Fascinating Rhythm, Ms. Crago’s first winning number to Mr. Benton’s  silky Astaire classic performance and duet with Ms. Crago ,Let’s Call the Whole Thing Off, the two spin the airy perfection of the real Astaire-Rogers partnership spiced feisty rivalry holding your interest like the beat of their tap-dancing feet. 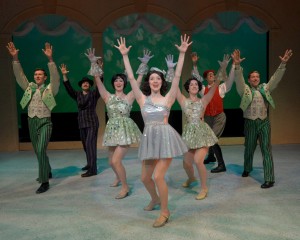 The musical has been thrilling audiences for eight years  since its premier in the sunbelt in 2007. Last night Crago and Benton brought the Astaire-Rogers mystique, engaging  opening nighters with the rap tap of tap, classic Rogers Astaire “turns.” It’s a darn good drama showing the tough, intrepid, not-to-be-denied spirit of the spunky original “Ginge” as the real Mr. Astaire used to call her. 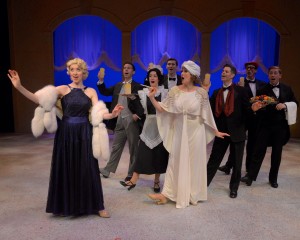 “Ginge” hosts a Hollywood Party with the wonderful AVITAL ASULEN delivering a living-on Marlene Dietrich (with cigarette holder). Asulen does a classic imitation of Ethel Merman in Act 1 (Below) You’ll meet Jimmie Stewart, Bette Davis, and Katherine Hepburn at the party, too. 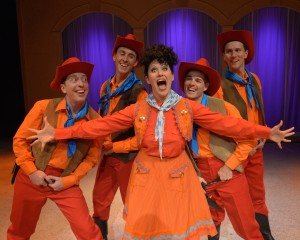 Avital Asuleen brings back Ethel Merman, singing I’ve Got Rhythm –another just flawless impression of the classic Merman, whom Ginger starred with in Girl Crazy.

Ms. Crago gives it all she’s got, and Mr. Benton delivers the appearing “effortless” sophistication that made men want to dance like him.

Highs heels tap, fly and prance across the WBT boards thanks to a crisp, no-let-down book that makes every use of Ms. Crago’s engaging enthusiasm. She’s a dancer who can sing, or a singer who can dance, and deliver a no-nonsense bosslady ‘tude – that was a key part of Ginger Rogers rise to the top paid Hollywood actress.

The show moves, with 19 songs — even with a 30-minute intermission, breaking at 10:25 P.M. It’s just the right length with charming Astaire-Rogers song and dance stagings driving the show as an oldtime Hollywood success story movie – which this musical brings off –showing Ms. Rogers’ flare and charisma and her flaws or assets, with no apologies.

Here are the Rogers-Astaire duets you old-time smoothies will remember, and millenials will discover with delight:

Let’s Call the Whole Thing Off, Change Partners (cleverly used to introduce Ms. Rogers’ 5 husbands), Shall We Dance, They All Laughed, Embraceable You, Let’s Face the Music and Dance (another fabulous sophisticated  turn by the multi-threat Mr. Brenton’s Fred Astaire), We’re in the Money, Ms. Crago’s delightful make-up with her “stage mother” mom, Ms.Amato as Lela, All My Eggs in One Basket.

Mr. Benton does not appear as Mr. Astaire until Act II when the Astaire-Rogers partnership-rivalry-intensity blossoms. But, do not dispair:

Ms. Crago’s Ginger in a blaze of triple threat talent just fills the first Act sails with no need of any extra help and she’s soaring Mr. Benton directed this splendid summer fare on the WBT’s boards and he has assembled a dancing saga-review-and drama in one.

Ginger and Fred dance up the memories and the inspirations for just one month,closing September 20.

As my critic friend Addison DeWitt would say, this is a hotter ticket than Hamilton. 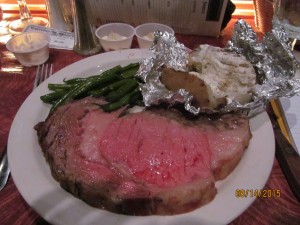 WBT is the only place you can get a great prime rib…and the longest-running supporting actress dish in theatre,(below) the elegant Peach Melba, shown receiving her Academy Award last night. Go to your box office mon, at WBT at 914-592-2222, or get on that website, www.BroadwayTheatre.com 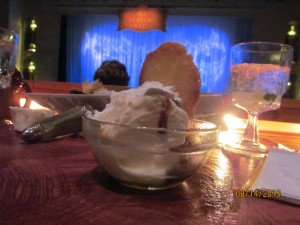 You’ll be dancing all the way home. Hand me down my tuxedo, next week I’m coming back for more. 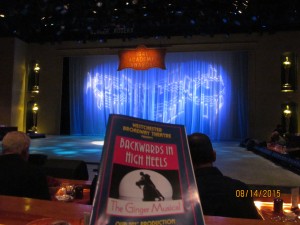 The Oscar goes to Darien Crago as Ginger Rogers.