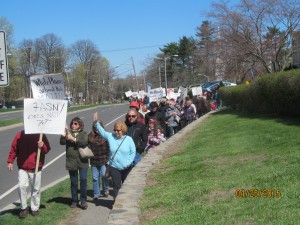 Over 100 persons from eight neighborhood associations staged a protest asking the Common Council of White Plains to deny the special permit the French American School of New York seeks to build a consolidated campus on the former Ridgeway Country Club.

The French American School of New York issued this statement to WPCNR in response:

“For more than four years the plan to create our School and the publicly-accessible Greens to Green open space Conservancy at the former Ridgeway Country Club has undergone the most intensive and exhaustive study and review of any development in White Plains history. The City’s elected officials, commissioners and departments, an array of expert consultants for both the School and the City, School staff, students and families and many White Plains residents have invested hundreds, if not thousands, of hours in this extended approval process.

The multiple public hearings have been closed and the thorough environmental studies dealing with every aspect of the plan have been officially adopted as SEQRA Findings by a 6 to 1 vote of the Common Council in December 2013. The School project is clearly better as a result of the input and careful planning that has transpired.  Currently, all involved are awaiting the final Site Plan and Special Permit vote by the Common Council.

Despite this lengthy and costly review, some area neighbors remain adamantly opposed to the School, as they have been from the start. Unsatisfied with the extensive revisions and improvements, traffic control measures, mandatory busing, reductions in the number of students, and the numerous other mitigation measures — many of which have resulted from their public input — they continue to try to defeat the planned School and Conservancy. Their attempt to legally challenge the approval process was dismissed by the New York State Supreme Court. Yet they continue to protest and oppose, often loudly.

It is worth noting that many of the neighbors and residents from across White Plains strongly support the School and Conservancy plan. Our supporters welcome 78 acres of public open space, with over 3 miles of walking trails and biking lanes, open daily from dawn to dusk, and at no cost to taxpayers. They also realize that FASNY will add to the educational, economic and environmental welfare of White Plains.

All of us at the French-American School of New York are eager to become active members of the White Plains community, as we have been in the other communities in Westchester County where we have had campuses throughout our 35-year history.

Geoff Thompson,  spokesman for the school said the school had no date yet from the city when the council would take up the matter again. (It currently awaits a Findings Statement from the Council, which will come when the Council feels all questions raised by envronmental review have been answered to the Common Council satisfaction.

Thompson said to his knowledge the school is not considering putting the property on the market at this time. Asked what progress the school had made in financing the project, Thompson said he would have to check with the French American School.

Ron Rhodes a resident of Gedney Farms who has published and written the city many times raising issues he feels the city has not examined closely enough, told WPCNR  he feels that the city is ignoring a covenant that went with the sale of the Ridgeway Country Club. That covenant dates back to 1925 the land was obtained. Rhodes said court decisions have upheld that covenants of the past are enforceable. The covenant Rhodes referred to stated that the land could only be used as a golf course.

John Sheehan, organizer of the protest said he was pleased with the turnout, and the number counted by a protester placed it at 150. Sheehan said he was planning another protest.

The demonstration was made on the sidewalk in front of White Plains High School. The group marched two or three abreast down to the YWCA and back to the entrance to the high school.

Sheehan said there were residents from the north end of town who marched and that participation was not limited to Ridgeway vicinity residents.

This reporter was told  that the prospect of closing Hathaway Land has faded and the city is working with FASNY on a reworking of the North Street entrance.

I was also told that persons attempting to sell their house in the vicinity of the threatended street have had buyers look at the home, liked it very much, but said they would not buy until they knew what was happening with the FASNY project.