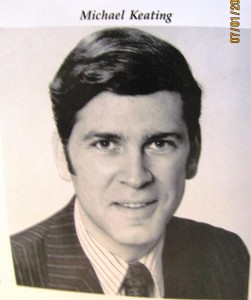 WPCNR MILESTONES. From McMahon, Lyon & Hartnett Funeral Home. July 1, 2014:
Michael Keating, the former Councilman and Mayor of White Plains, passed away on June 29, 2014 at the age of 75.
He was born in Philadelphia, PA to the late Mary (Jordan) & Patrick Keating on May 31, 1939. Michael married his wife, Rebecca, in Santa Barbara, CA on June 26, 1965. Together they have 2 children: Mary Brooks Keating & James O’Malley Keating, both of White Plains. Also surviving is a grandchild Nico Talia Keating and 2 sisters; Corinne Keating Devereux & Jane Keating Ryan.
Michael was a graduate of Power Memorial Academy in NYC , Villanova & NYU Law School. He was a self-employed attorney. He served on the White Plains Common Council from 1970-1973. He was elected President of the Common Council in 1974 and was appointed Acting Mayor later that year when his predecessor, Carl Delfino, died in office. He was elected to the mayoralty in 1975 serving a one-year term.
As a Councilman, Michael was instrumental in preventing the erection of a huge elevated feeder route into White Plains that would have blighted both the shopping district and certain residential areas of the city (Battle Hill).
As Mayor, he was responsible for major decisions concerning the development of the extensive urban renewal area in downtown White Plains. Those decisions transformed the city into the dynamic urban center that it is today.
Visitation will be Wednesday 2-4 & 7-9PM at McMahon Funeral Home 491 Mamaroneck Avenue, White Plains, New York.
. Mass of Christian burial will be Thursday 10 AM at Mt Carmel Church with interment to follow at Gate of Heaven Cemetery. In lieu of flowers, please make a donation to Red Cloud Indian School, 100 Mission Drive, Pine Ridge, S.D. 57770 in Michael’s name.