↓
Home Menu ↓
Home→Secret New Teacher Contract Proposed by School Board and Teacher Negotiating Team is Rejected by Teachers, 52% to 48%

The clerk to the White Plains Board of Education Michele Schoenfeld confirmed to WPCNR Friday  the White Plains Board of Education had not announced publicly in any public meeting  or news release that a tentative agreement had been reached with the teachers who have been without a contract for two years. There has not been an announcement by the district of the offer, the proposed new contract, or announcement of the rejection of the offer.

The “secret from the public” contract (the district’s third offer to its teachers since 2012) was rejected in a vote held Friday, June 20, one week ago. 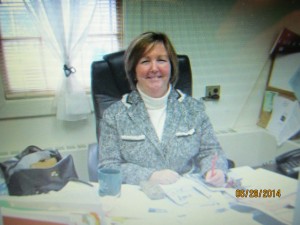 Tthe President of the White Plains Teachers Association, Kerry Broderick,  (above, shown in a photo from the WPTA website) told WPCNR Friday the  vote of rejection was  273 “No’s” to 254 “Yes,” a margin of 52% against the contract and 48% in favor.

The teachers have rejected an offer that would have slowed the pace of step increases by paying half the proposed increases in September and the other half in January in the three contract years ahead.  The rejected agreement would have increased salaries across the board by .9 % beginning in 2014-15,  3/4 of a percent in 2015-16, and .4% in 2016-17. The rejected agreement did not offer across the board retroactive salary  step increases for 2012-13 and 2013-14, the year ending in 2 days.

Broderick said reports that no increases would be received by teachers in 2012-13,2013-14   was technically not correct. She told WPCNR that the teachers were paid step and lane (academic degree progress)  increases they were entitled to under the New York State Taylor Agreement the last two years under the previous step chart of the old contract that took effect February 1, 2012

Also part of the rejected contract teachers at the top step of 20 years experience, would have received a $600 one-time payment added to their 2013-14 pay.

For example, in the second year without a contract, 2013-14, a teacher with a BA plus 15 credits towards an MBA in their 7th year in the district this year received a $2,394 salary increase automatically as part of the previous contract effective February 1, 2012 under the Taylor Law provision.  White Plains teachers got step increases in 2012-13 and 2013-14. The proposed  now defeated contract did not add increases to those step increases

There was also one-time incentive of a flat $3,000 one-time cash payment  to induce teachers currently on a health plan other than Statewide Schools Health Insurance (the state schools insurance cooperative) to switch to SWSCHIP

The Memorandum of Agreement notes comparable settlements of school districts in the area: 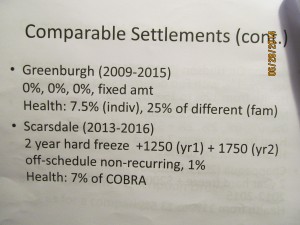 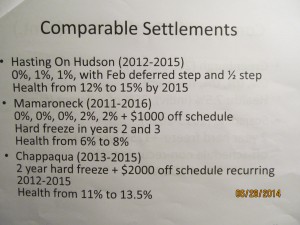 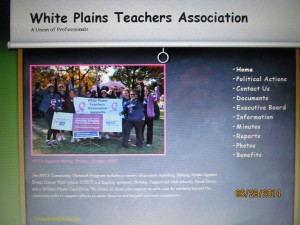 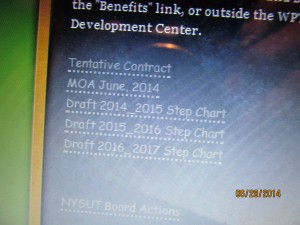 The previous two offers from the district occurred under the previous Superintendent of Schools, Dr. Christopher Clouet, and  were rejected though Dr. Clouet did not directly negotiate the contracts.

Last week’s losing 52% to 48%  margin was exactly the same of the first contract rejection during Dr. Clouet’s Superintendentship (though Clouet was not involved in the negotiations) in September, 2012, 52% to 48%.  Two months later the contract was reoffered to teachers without change and was resoundly rejectd by a 2 to 1 margin.

Kerry Broderick, President of the White Plains Teachers told WPCNR that the new contract grew out of negotiations begun during the fact-finding process with the Board of Education negotiating team and the Teachers negotiation team.

She said the fact finder (supervising the process) has not made an official report, and Broderick said it was normal that in any fact finding process, negotiations were always possible and considered.

Asked if she had a sense of why the contract that expanded step salary increases to 20 levels, offered generous incentives for teachers willing to reject present health, and offered across-the-board salary increases, after no salary raises for the previous two years was reject, Broderick said she did not know and would have to get a sense of her membership when teachers started preparing for the new school year August 1.

She said she did not participate with her 7-teacher team of negotiators, whom she said represented a cross section aware of all salary levels, seniority and teacher universe demographics. She declined to name negotiators for the school district, but said that Interim Superintendent of Schools Timothy Connors participated.

As of late Friday night, the White Plains Board of Education has not issued a statement.