↓
Home Menu ↓
Home→NNYB Guaranteed not to Cost $14 a Trip. DOT to start part of BUS RAPID TRANSIT by 2018. Tweaking I-287 to Relieve Cross Westchester Congestion Possible. Money Not There Yet to Do Either

“Mr. New NY Bridge” Brian Conybeare enthralled 18 representatives of the Council of Neighborhood Associations Tuesday night with a confidence-building, candid new video showing Tappan Zee Constructors efforts to suppress noise, local disruption, protect sturgeon , and monitor structural integrity. He showed the timeline as it now stands, showing  the audience just where the new Tappan Zee Bridge is in its schedule and what is ahead. 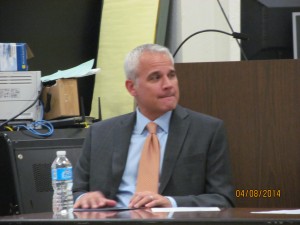 Number one, Conybeare, one of the sincerest and most earnest presenters you will ever meet said the toll on the New NY Bridge has not been decided yet, but will be decided by a financial task force awaiting appointments by Governor Andrew M. Cuomo . Connybeare promised the toll would not be $14 as originally touted two years ago. 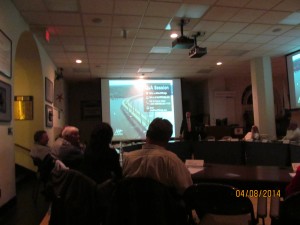 Conybeare told the audience and confirmed to WPCNR in remarks after the meeting that financing in addition to its $1.6 Billion TIVIA loan, would rely on New York State Thruway Municipal Bonds, which could be supplemented by possible grants from the federal  government.  Conybeare said any toll might be mitigated by lower rates for residents. The toll has yet to be determined. He guaranteed it would not hit the $14 level and guaranteed no toll increase in 2014.

WPCNR estimates under current private sector loan rates that a 30 year municipal bonding for the balance of the $3.9 Million bridge in addition to the $1.6 Billion TIVIA loan and interest,   without grants would be covered  by an $11 toll.

In the course of his talk, he said that major reconstruction of I-287 east and westbound is not being considered because the six lane insterstate has just completed a 15 year reconstruction and “there is stomach for it (new I-287 construction). Asked by WPCNR if HOV lanes and redirection of traffic might be being considered to relieve the 4 lanes into 3 merge that will exist eastbound even after the bridge is constructed, Mr. Conybeare said the Department of Transportation would be responsible for that and “is looking at it.”

His 30 minute video confirmed that the Bus Rapid Transit System in some form would be in place at the opening of the bridge in 2018. He told the audience that financing of the improvements for the system including the buses is not in place, either.

He said Bus Rapid Transit access to the White Plains Transit Center  is envisioned to come through the Westchester County Center parking lot at this time and would not block neighborhoods’ routes to the station.

On the shortage of expert pile welders now being experienced by the construction team, Mr. Conybeare said Tappan Zee Constructors is now training local union workers in the special expertise to weld the pilings together to support the bridge. Asked when Tappan Zee Bridge Constructors would have an adequate welding force to proceed, Connybeare did not have an answer to that yet. He said that all welds on the pilings are being tested with ultrasound equipment to assure the welds in the pilings have structural integrity. He emphasized the bridge is right on schedule at this time.

The problem of cracks in  structural welds on pilings of the main support structures in the new Oakland Bay Bridge last fall required  last minute addition of saddles on the towers of the new Oakland Bay Bridge built by Fluor Corporation and the American Bridge Company before that new bridge could open to the public. Failed welds  delayed the opening of that bridge from July to September in the fall of 2012.l.

The video is viewable at www.NewNYBridge.com

New York State Assemblyman David Buchwald was the only local government official to attend the meeting.