White Plains Week The Interview, a show  completely different and separate from the news roundup show, debuted Monday evening at 10 P.M. on White Plains Community Media on channel 45, seen all over Westchester County on FIOS, and on Cablevision/Optimum Channel 76 in White Plains. It may also be seen now on the internet at www.whiteplainsweek.com. 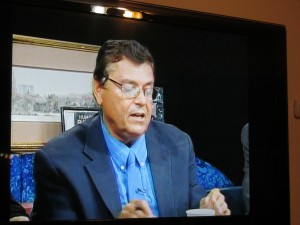 John Bailey, the Executive Producer and host of White Plains Week said: “I’m starting this program to provide an intense personal side of White Plains Week  interviewing personalities, protagonists involved in current issues, projects, and concerns that affect not only White Plains, but Westchester County, the entire Tri-State Area. I plan to have guests on talking on the record about the subjects people are talking about.” 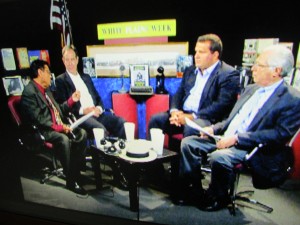 Last night,  White Plains Week The Interview (A Working Title) interviewed Michael Zarin of Zarin & Steinmetz, the attorney for The French American School of New York, and John Botti, a member of the FASNY school Board of Directors discussing what lies ahead in the FASNY effort to obtain approval of the Common Council for a 7-building $80 Million campus on the former Ridgeway Country Club property, bitterly opposed by the Gedney Association.

They comment on the cost of the project, their state of financing, the attitudes of Westchester County and the city departments on North Street proposed entrances to the property and why the school feels it has met community concerns.

“The news advantage of White Plains Week The Interview is putting people in front of the all-seeing camera and asking them the questions just not being asked. I will also be having personalities on famous beyond the White Plains City limits Westchester County discussing what needs to be discussed that nobody’s discussing with the objective being the truth, justice, and the American Way.

“Guests I have interviewed in the past as part of the news roundup show the last 12 years just do not have the time to express themselves nor I have the time to get in all the questions and the news too. White Plains Week The Interview will change that. Of course, it takes courage to come on a White Plains Week interview because we know the questions to ask other reporters aren’t asking,” Bailey said.

Watch this evolving show  now on the internet.

The perennial favorite, the leader in television newstalk in Westchester County, White Plains Week will continue to telecast at 7:30 Fridays and 7 P.M. Mondays on Channels 45 and 76, and you can see it 24/7 on the internet www.whiteplainsweek.com, because you never get enough of White Plains Week.