↓
Home Menu ↓
Home→FASNY ENDORSES ALIGNED INTERSECTION AT NORTH ST AND WPHS. SAYS COUNTY DPW AND TRAFFIC LIKE IT. UNCLEAR IF CITY AGREES. 14 OF 16 SPEAK, SAY PROJECT DOES NOT WORK.

French American School of New York proposed this Aligned Intersection at the entrance to White Plains High School to the right in the simulation above,  creating a North Street entrance to their proposed new 1,200 student campus to be built on the old Ridgeway Country Club property. A two lane access road would be built into former fairways (left of picture) leading into the club. Cars attempting to make a u-turn heading on North Street north, would be able to turn around in the new Ridgeway entrance drive. Student crosswalks would be built to cross the street to the bus stop and the YWCA

Seventy persons packed the Board of Education meeting Monday evening, most drawn to hear the French American School of New York explanation to the school board of what FASNY would request for entrance redesign and construction of  the Board to allow at the White Plains High School entrance, should a North Street entrance be accepted by the White Plains city Common Council. 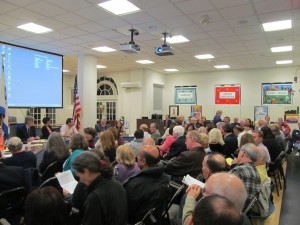 The FASNY presenter pointed out that the aligned standard intersection had been endorsed by the Westchester County Department of Public Works and the Westchester County Traffic Commissioner (North Street is a county-owned road). The presenter said FASNY feels the aligned intersection on North Street is the best option, and presently is not considering the roundabout suggestion at North Street or an entrance on Bryant Avenue as noted in the Final Environmental Impact Statement approved last week..

Common Councilman John Kirkpatrick in attendance, asked if the White Plains Planning Department and Public Works Department had approved the aligned intersection too, declined to answer the question, and said “There are still a lot of problems with the Final Environmental Impact Statement. And we are keeping an open mind.”

FASNY also presented a series of North South and East West walking trails that would allow students to walk from Bryant Avenue and Ridgeway to the high school through the former Ridgeway School. They said a mandatory busing program would cut the amount of vehicular traffic by 50% (correction from 80% that appeared previously in this report).

FASNY allowed there would be a service entrance on Ridgeway, too. FASNY also said they will stagger starting hours for their high school, middle school and elementary and nursery schools on the site to mitigate traffic impacts, showing how overlaps spread out the traffic flow.

Fourteen of 16 citizens speaking at the traditional public comment period (scheduled at every Board of Education meeting), were against the North Street entrance alternative presented and most declared there would be too much traffic impact no matter how staggered the hours were. 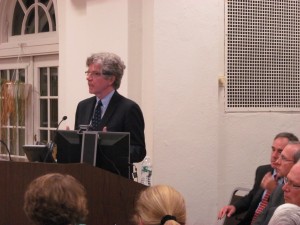 Interim Superintendent of Schools, Timothy Connors, above, said after the hour and twenty mintute presentation and comment period, the Board of Education would now gather more information from FASNY, and get answers to questions the Board might have. If a request is made for the Board to act on any construction taking high school property, Connors said he would make a recommendation to the Board.

WPCNR reached out to Common Council President Beth Smayda, asking what the timing of any Board of Education vote on approving or rejecting a North Street entrance to the school.

The issues on  timing  of Board of Education action on the North Street entrance presented Monday night are, (as best as WPCNR can determine) are:

1.)should the Board approve or reject the North Street proposal before the Council makes a Findings Statement,

2.  after the Council makes a positive finding on the FASNY project (and before the preparation of a site plan by FASNY), or

3. after a site plan is submitted by FASNY

4. Whether a vote would only come if a Common Council site plan approval of the project included the redesign of the White Plains High School entrance to accommodate an entrance and egress drive off North Street  leading into the now dormant fairways of the former Ridgeway Club into the new French American School of New York campus.

Council President Smayda has not yet responded.

The representatives from the school said they, if greenlighted by the White Plains Common Council would open in 2015 with construction expected complete by 2019.